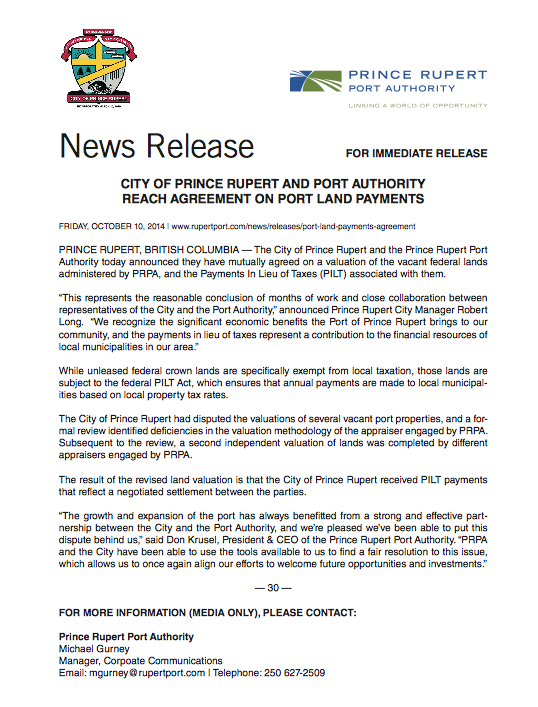 A late Friday afternoon news release heralded glad tidings for Thanksgiving (and election time we might add), with word of a settlement in a long running dispute between the City of Prince Rupert and the Prince Rupert Port Authority.

Through twin news updates, the Port and the City outlined the settlement of their outstanding issues related to the Payments in Lieu of Taxes process.

The dispute had centred on the valuation of several vacant properties and through a formal review the City identified deficiencies in the valuation methodology of the appraiser that the Prince Rupert Port Authority had used.

A secondary independent review conducted by different appraisers engaged by the Port offered up a revised valuation that led to the negotiated settlement of Friday.

It was noted in the press release that unleased Federal Crown lands are specifically exempt from local taxation,  subject to the Federal PILT Act, which results in annual payments made to local municipalities based on local property tax rates.

Both sides of the discussions found aspects of the process to herald moving forward. With City Manager Robert Long acknowledging the amount of work that was required to reach the resolution to the dispute.

“This represents the reasonable conclusion of months of work and close collaboration between representatives of the City and the Port Authority,” ... “We recognize the significant economic benefits the Port of Prince Rupert brings to our community, and the payments in lieu of taxes represent a contribution to the financial resources of local municipalities in our area.” -- Prince Rupert City Manager Robert Long

From the perspective of the Prince Rupert Port Authority, Friday's announcement allows for the two sides to continue a strong partnership and the chance to put the concerns of the past behind both sides.

“The growth and expansion of the port has always benefited from a strong and effective partnership between the City and the Port Authority, and we’re pleased we’ve been able to put this dispute behind us,” ... PRPA and the City have been able to use the tools available to us to find a fair resolution to this issue, which allows us to once again align our efforts to welcome future opportunities and investments.” -- Don Krusel, President & CEO of the Prince Rupert Port Authority

The port offered up a more expansive update on the situation following the news release, which included background on the revised appraisals of vacant port properties which was conducted by both the City and the Port to negotiate the equitable payments.

The revised valuations means that the City will receive a one time payment of 2.6 million dollars to reflect those new valuations retroactive to 2007.  The City has already received that money through payments advanced by the Port to the City in 2013 and 2014.

The Port's annual payment in lieu of tax for 2014 was directed to the City in July to a total  of 1.152 million dollar.

As part of the completion of the process, the Port agreed to contribute to the expenses incurred by the City through it's participation in the dispute resolution process.

For those thinking that the City would be announcing a large sum settlement however, the news of Friday would seem to suggest that what the City has already received, is what they will get.

With the previous advances on PILT making up the bulk of the renewed valuations.

The new Council to be elected in November will be the main beneficiary of the agreement signed Friday, as it would seem that they will be using the new valuations in their budget preparations for 2015.

The full review of the process can be found from the Prince Rupert Port Authority website here.

The issue of PILT has been a controversial topic for a few years now with City Council, some of the highlights of the discussions over the last 24 months can be found below:

You can review other items of interest on Council from our archive page.
Posted by . at 10:36 AM