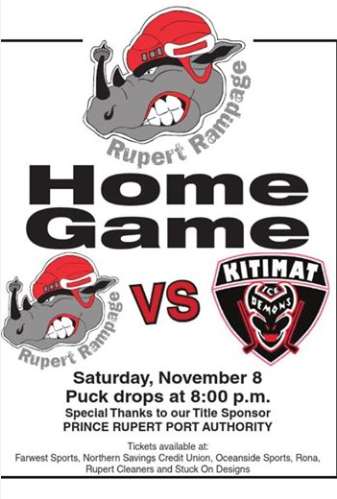 Fans of the Prince Rupert Rampage will want to pack the Jim on Saturday night, as it's the last chance to see the home side for the next few weeks.

The Rampage take on the Kitimat Ice Demons on Saturday with an 8 PM puck drop, looking to pick up two points for the standings before their journey of the weeks ahead, part of which takes them deep into the Cariboo.

The Ice Demons are the only winning mark so far on the Rampage score sheet, as the Prince Rupert squad kicked off the 2014-15 CIHL season on October 4th with a shoot out victory over the visiting Kitimat squad.

Since that time, the Rampage have been in some tough contests, coming close to the win column on a number of occasions, but still head into Saturday night's home game with a 1 and 3 record.

Despite those missed opportunities to make a move,  the Rampage are still in a good position in the West Standings. Staking a claim for third place heading into the weekend.

The team is holding their own when it comes to offensive stats with fifteen goals in the For column, however a focus on defence seems to be the task ahead, as they seek to slow down the pace of the goals against which now stand at 20.

A win on home ice on the weekend will be highly desired by the home side, once the final buzzer sounds on Saturday night, the Rampage will be loading up the team bus for a fairly extensive tour of the province.

Next weekend Prince Rupert is off to Williams Lake and Quesnel, they then return home for a one week break before hitting the highway again.

November's extended cruise of the province will find the Rampage in Smithers on the 22nd and 23rd, with one final road trip set for the 29th of November when they will be in Kitimat.

They finally return to the welcome confines of the Jim, on December 6th and 7th when the Smithers Steelheads will make the trip to the North Coast for a weekend doubleheader.