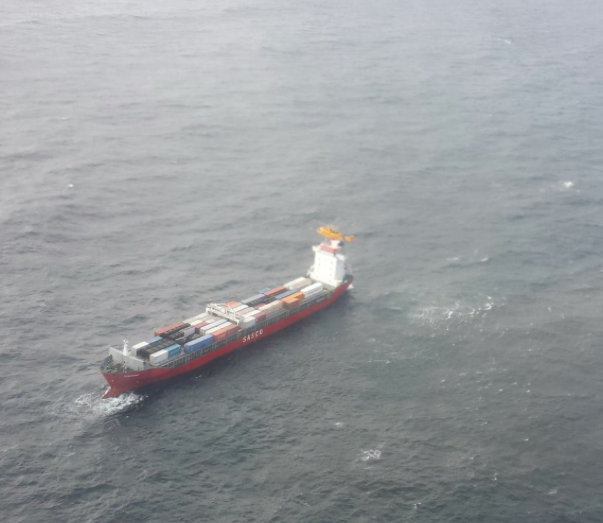 A day of concern for those on Haida Gwaii and hard work for members of Canada's military and Coast Guard came to a welcome conclusion late into Friday evening.

Shortly after 8:30 PM on Friday, a notice from the Council of Haida Nation was issued advising that the Canadian Coast Guard vessel Gordon Reid had successfully attached a tow line to the Russian container vessel Simushir and had begun the process of slowly moving it away from the Haida Gwaii coastline.

The plan of approach seemingly to secure the stricken ship off shore and await the larger Coast Guard  vessel Sir Wilfrid Laurier,  the US Coast Guard vessel Spar and accompanying tug boats to arrive.

Once the weather settles and the the Russian vessel is stabilized, it will apparently be towed to Prince Rupert for further inspection and repair.

The drama played out for most of the day Friday, the first alerts to the potentially dangerous situation arriving in the mid morning period.

Through the day, crews out of Prince Rupert, Comox on Vancouver Island and assistance from the US Coast Guard out of Ketchikan, began to make their way towards the west coast of Haida Gwaii.

The Joint Rescue Centre out of Victoria handled the traffic maintenance on the mission, tasking vessels and aircraft to the incident site.

With air assets from Comox arriving on station by the late morning period, airlifting the captain of the stricken vessel who had been injured during the rough seas of early Friday morning.

He was subsequently taken to Sandspit  and transferred to the BC Ambulance service for further care.

By early evening, the Gordon Reid had arrived in the area and started the process of attempting to secure its tow line, with success arriving shortly after 8 PM.

While weather remains a concern for the area, the immediate danger to the coastline of Haida Gwaii seems to be reduced significantly from the situation as it was evolving earlier in the day.

No timeline has been provided as of yet regarding when the Simushir is expected to arrive at Prince Rupert harbour, or where it will berth.

Late Friday evening the Coast Guard and Department of Defence issued this joint statement, which outlined the account of events through the day Friday.

You can review the timeline of events of Friday from our original post on the incident here.

Further updates through the evening and into Saturday can be found from that rolling archive of events for the incident.

Update: Sunday afternoon the Prince Rupert Port Authority outlined through twitter the plan ahead for the stricken vessel, which will be berthed at the North end of the dock at Fairview Terminal sometime in the early morning period Monday.

You can track the transit of the Simushir and its escort vessels on their way to Prince Rupert from the mariner traffic website
Posted by . at 9:39 PM