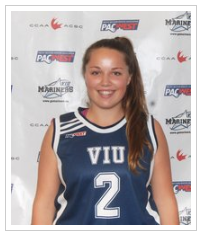 When Celina Guadagni suits up tonight for the annual VIU Mariner's pre-season Alumni match, she and her team mates will quickly get a good idea as to how well they have come together in their training camp over the last month.

The Mariners who took a bronze medal last year in the Canadian Collegiate Athletic Association championships, will face 2014-15 with a line up of new faces for the most part, with five starters from last year having moved on.

Stepping into the Mariners lineup this year are eight new additions to the team, one of which is Charles Hays grad Guadagni, who was a key component of the Rainmakers during her time at CHSS.

And with a collection of players who have had little time to get used to each other, head coach Bill McWhinnie understands that the learning curve will take a bit of time to establish itself.

The Mariner's coach does however, have the incentive of hosting the CCAA championships in Nanaimo this year as a way to help build that much need spirit of working together, with a championships berth within grasp, even before the season starts.

The first step towards that goal comes tonight, as the Mariner's 2014-15 roster takes on the alumni squad at the VIU Gymnasium.

The first tip off  for competitive CCAA action comes October 30th, when VIU launches is regular season by hosting Camosun College at the Nanaimo Campus.

The Nanaimo Daily News provided an instructive primer on the road ahead for VIU, which you can read here.

More on the VIU program and the season ahead can be found from the Mariner's home page.

You can follow the progress of Ms. Guadagni and her squad through our Prince Rupert athletes archive page here.
Posted by . at 8:35 AM