The Canadian Environmental Assessment Agency has issued notice regarding its public comment process for the Woodside Energy LNG Terminal proposal for the Grassy Point area of the North Coast.

Woodside Energy is the Australian energy company which first arrived on the radar for the North Coast back in January, when they joined the growing rush to stake out some shoreline in the region.

The two main options under consideration by Woodside Energy for Grassy Point are: 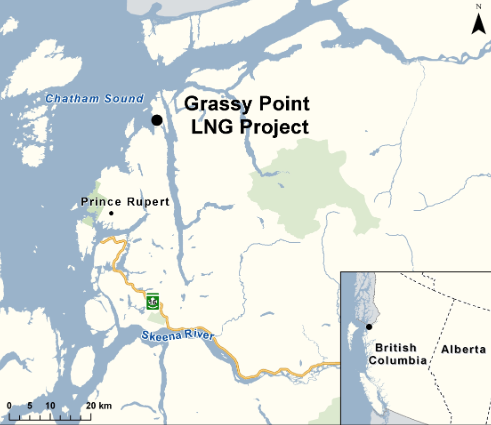 An onshore LNG facility and nearshore facility, with either proposal providing for construction of LNG trains, associated services and marine facilities.

The operational phase of the proposed facility would be at least 25 years, with the full capacity expected to be 20 million tonnes per year.

We outlined the nature of those two proposed development options on the blog back in June, following a presentation by Woodside officials at Prince Rupert City Council.

The snapshot of the project and contact information for those that wish to make comment on the proposal can be found here.

The larger overview of the documentation related to the Grassy Point project can be found from the CEAA website here.

An interesting note on the Woodside application to the CEAA (and perhaps for those other companies wishing to explore Grassy Point) is the commitment to explore opportunities for Federal and State agencies in Alaska as part of the environmental assessment.

Grassy Point is located within 16.4 kilometres of the Alaskan border, the correspondence from Woodside would suggest that development proposals for that area of the North Coast, are of much interest to US officials.

The deadline for Comments on the Woodside proposal must be submitted to the CEAA is November 3rd.

More on the Woodside LNG proposals can be found on our archive page.
Posted by . at 9:18 AM