Two Cariboo teams on the Rampage schedule for this weekend 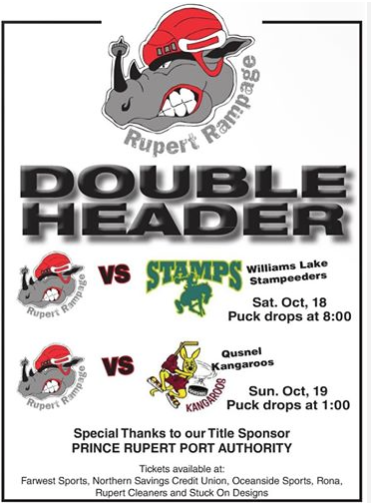 It's still early in the CIHL season, but a strong test for the Prince Rupert Rampage comes up this weekend, with a double header on tap for the home town side.

As two tough, competitive squads out of the Cariboo make the trek to the North Coast.

The Williams Lake Stampeders make the first call into the Jim, a Saturday night match up with puck drop at 8 PM.

The Stampeders currently sit atop the CIHL East with an undefeated record after three games.  With 19 goals on the plus side they trail only the Terrace River Kings in offensive output in these early days of the 2014-15 season.

The Rampage won't have much time to rest up from Saturday's game, with a quick turn around for a Sunday matinee against the Quesnel Kangaroos who will face off against the home side at 1 PM.

Quesnel may be a very ornery team by the time they steer the team bus to the North Coast.

Heading into this weekends action, they remain without a win, showcasing some 57 minutes in penalty time as the record of their frustration.

For the Rampage the weekend offers up the chance to get back on a winning track, after an entertaining match up with the River Kings last weekend in Terrace.

A game which saw the Rampage mount a pretty impressive comeback, only to fall short in the final minute as the River Kings knocked in the insurance marker into an empty net.

The Rampage will have to take some of the lessons of the first two games to heart however, if they wish to sweep the Cariboo teams in the weekend series.

Setbacks in the middle periods have been a bit of problem for Prince Rupert as the season has opened. Tightening up their play in their own end, avoiding untimely penalties and keeping the attack in the opposition end could be key to how they fare over the 24 hour burst of hockey to come.

The latest news out of the Rampage camp can be found from their Facebook page and twitter feed.

You can follow our Rampage coverage from our archive page here, while CIHL news and scores can be reviewed here.
Posted by . at 3:35 PM