Much information available for review from Port's Annual Report 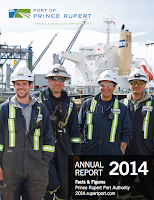 As a follow up to last month's Annual Public Meeting of the Port of Prince Rupert, the Port Authority has published a full report on the overview provided by CEO and President Don Krusel and a range of other officials during the June presentation.

As we outlined at the time, the Port's annual gathering provided a review of the growing trade through the Port facilities and the opportunities that lay ahead.

The Port provides further background to that conversation with their most recent documentation, which includes a look  at the Port's Financial Statements, as well as a number of notes on related issues.

The online version of the Annual Report can be found here, it features an info-graphic approach to  the presentation of the Port's main talking points for the year just concluded.

As part of that presentation is this link to the Port's Economic Impact Study from earlier this year, which provided further background into the reach that the Port is providing for across Northern British Columbia.

A short overview of the Annual Report is also available for download from the Port's website as well,  it features a message from the Chair and CEO of the Port Authority that traces some of the focus the Port is putting on diversification as it moves forward with its plans.

The highlights portion of the report notes the number of new jobs created in Northern BC since 2011, the commitment of 4.3 million dollars to the Community Investment fund since 2010 and the increases found  not only in containerized cargo shipments through Fairview Terminal, but also the positive numbers from Prince Rupert Grain and the Westview Wood Pellet Terminal.

Among some of the further background to be found for those inclined to a little exploration, is the full overview of the Consolidated Financial Statements, prepared for the Port by the Victoria accounting firm Grant Thornton.

And while Financial statements are not the thing of riveting reading, the snippets of information to be found from them do provide for a bit more information into the workings of what is now the dominant industry on the North Coast.

That review can be found here.

Some of the key aspects that are examined include:

A review of the statements related to assets and liabilities, revenues and expenses values, as well as the risks associated to long term debt and other key elements of the Port's day to day business.

A bit of background is also provided on a number of themes related Port development in the region.

A review of employee benefits can be found throughout the document providing a look at the impact that the Port is having on employment in the region.

The nature of the Port's Community Investment Fund is explored on page 32, outlining how the amounts to be allocated to that fund are determined by a percentage of positive net earnings on a year to year basis.

The ongoing discussions related to Payment in Lieu of Taxes is highlighted on page 33 of the report, with the various parts of those discussions included in the contingencies review of the Consolidated Financial Statements.

The report wraps up with the remuneration disclosure table for Directors and Senior Staff of the Port authority, which  can be found page 34 of that report.

The financial statements provide a fairly instructive glance into the footprint that the Prince Rupert Port Authority has not only when it comes to the economy for the Prince Rupert area, but across Northern British Columbia as well.

For more items on issues related to the Port of Prince Rupert see our archive page here.
Posted by . at 11:15 AM