The theme of growing up healthy in Northern British Columbia will be the main focus of discussion tomorrow when Northern Health officials host one of two sessions this week on the North Coast and Haida Gwaii.

Wednesday's meeting is to take place in the Eagle Room at the Jim Ciccone Civic Centre from 7 to 9 PM, as Northern Health looks for feedback from community residents on issues related to child and youth health across the region.

The Consultation session is building on the recently released report by Dr. Sandra Allison,  the Chief Medical Health Officer for Northern Health. 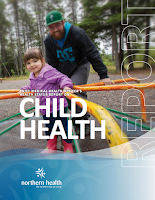 The 44 page overview of health issues across the region reviewed some of the concerns that need to be addressed when it comes to care for children and youth the region, as well the document provides for a comprehensive look at some of the supports available for a healthy start for children across Northern British Columbia.

Some of the key elements from that report noted a range of concerns when it comes to the state of health for children in the area, among the major notes:

Across most of Northern British Columbia one in five children live in low income families.

Women in Northern BC have the lowest rates of exclusive breastfeeding of their babies up to six months of age.

About a third of our children are not emotionally or physically ready for the transition to enter school.

Children in Northern BC have higher rates of poor oral health when compared to the rest of the province, including the highest rate of dental surgeries.

The rates of injury related hospitalization of children are among the highest in the province.

Rates of child abuse, neglect and children in need of protection are among the highest in the province.

The report also delivered a number of recommendations that should address some of those concerns, among some of the main elements of note.

The need to develop a program to focus on children, youth and families in Northern British Columbia, seek more collaboration in our communities and strengthening the partnership between Northern Health and First Nations Health Authorities.

The full report from Northern Health can be viewed here.

Wednesday's session in Prince Rupert, is the second to last of a series of community engagements across Northern British Columbia in the last two months.

The tour comes to an end on Haida Gwaii on Thursday, with the final engagement session taking place at the Queen Charlotte City Community Club from 7-9 PM.

Health Minister Terry Lake noted the importance of the two month engagement period for Northern Health as they work to improve outcomes for the youngest of residents of the north.

“Northern Health’s consultation series is an effective way to gather information from people in northern B.C. and identify how best to support the health of children and youth,” .. “The consultation will provide an opportunity to promote existing work, particularly in rural areas, and recognizes that working to improve the health of the youngest residents is a key step to a healthier north.”

You can also help out the process by taking part in an online Thought exchange survey hosted by Northern Health, you can learn more about that initiative here.

For more background on issues and items related to Northern Health see our archive pages here.
Posted by . at 10:38 AM