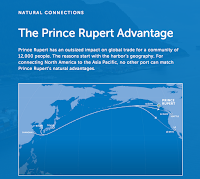 The Prince Rupert Port Authority delivered its Annual review to the public on Thursday with a stream of Port officials providing some of the background notes on a year that found continued success for the North coast's gateway to the world.

The Port chair hailed the relationships that the Port has built with customers, supply chain partners and government officials, with a strong focus also on the relationship with representatives of First Nations, highlighting the Prince Rupert approach of a strategic trade corridor that is aligned from one end to the other.

The approach by the Port towards to a seamless transit process has once again provided a strong result for the year just past and while 2015 did not have the same numbers as 2013 and 2014, overall performance results still look fairly impressive.

Thursday, Port CEO Don Krusel noted for the audience that the Port has maintained volumes in 2015 through some strong performances in grain biofuel and intermodal operations.


Through 2015, the Port reached 423 vessel calls with not one incident to report, with the work of an integrated approach to safety and security at Port facilities noted as key to that record over the last year.

Recent investments in a range of navigation systems, as well as environmental measuring and monitoring and real time online data were also noted as a important elements towards the port's goal of a planning framework that could see up to 1500 annual vessel calls in the next decade.

The Port's Vice President for Finance Joe Rektor, contributed some of the financial numbers on the day to put the port's success into perspective, observing that of the other 18 Port Authorities in Canada, the Prince Rupert Port Authority has consistently been the 6th largest port by tonnage since 2011, while it moves up to the status of the nation's third largest port when you look at the net income outcomes reported.

While there may have been a set back from last week's announcement of the cancellation of the Canpotex terminal for Ridley Island, Thursday the Port kept a focus on the future with a look at what is still percolating on the development side.

Shaun Stevenson the Vice President for Trade Development offered up some of the potential export solutions for natural gas shipments that the Port has to offer, as well as the advancement of the project to ship propane out of Ridley Island.

The container port expansion prospects also were subject of some overview, with DP World Ports having taken over the operations of the Fairview Terminal with new shipping lines arriving and expanding the reach from Prince Rupert into Asia.

Container volumes surpassed 775,000 TEU's in 2015 with the prospects for growth driving opportunities to explore further terminal expansion and logistical services to the region.

That close engagement has seemingly steered how the Port approaches its operations in the region, with Mr. Krusel noting that the more the Port learns of its First Nations partners, particularly when it comes to values, priorities and aspirations, the port has realized how aligned the collective future is.

For the City of Prince Rupert the most significant news of the meeting came through an announcement related to the PILT process, with the Port noting how the payments in lieu of taxes process provides for a strong industrial tax base for local government's.

As part of this years discussions, the Port announced Thursday that they had reached an agreement with the City related to the assessment of vacant Crown land, with the Port to deliver 5.3 million dollars for the period of 2013-15.

The PILT process has been a thorn in the side for the City of Prince Rupert for a number of years, making Thursday's announcement a fairly significant step towards a solution to a long running issue.

As well, the Port CEO also outlined that both the Port and the City had devised a method that will guide future calculation of payments and address differences of opinion in a practical approach.

In addition to the PILT payment, the Port also announced a further good faith commitment of $1.5 million for a future local capital fund to be identified by the Port and the City.

The District of Port Ed also found something to cheer about at Thursday's meeting, with the District set to receive a 250,000 dollar contribution towards the District's Train Whistle Reduction plan to help to maintain quality of life in the community.

The 2015 Annual Report can be reviewed here, while the Port's Financial statements for the year can be examined here.

Many of the themes introduced at Thursday's gathering are expanded on as part of the Annual report document, providing a glimpse into the many elements that contribute to the port's footprint in the community.

The flow of information outlines a  mix of statistical overview with some insight into the workings of the port and its impact as both as an economic engine and major provider of employment for the communities of the North Coast.

You can review more on items of interest from the Prince Rupert Port Authority through our Archive page here.