SD52 adds to available Day care options for this fall

School District 52 announced the approval of a number of existing leases for Daycare services at local schools last week, while also adding one more option for parents or guardians in the community.

At their June 14th Board meeting, the School District outlined that the lease for Daycare with the Westview Childcare  Society had been approved for 2016-17

A full range of daycare options will once again be available at École Roosevelt Park Community School, with pre-school, before and after school care and the HUB program all to be offered at the school in September.

Pineridge elementary will also continue provide for its before and after school care program in the year ahead.

While a new lease was approved for the year ahead,  that will see the daycare and before and after school care in place at Lax Kxeen Elementary School starting in September of 2016. 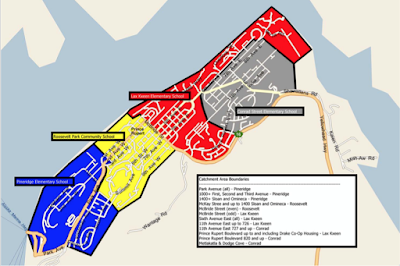 With the addition of the new lease for Lax Kxeen, all of the District's elementary schools will be offering some form of a daycare option for the 2016-17 school year.

More on last week's School District meeting can be found here, further background on School District notes and issues can be reviewed on our archive page.
Posted by . at 9:17 AM

Email ThisBlogThis!Share to TwitterShare to FacebookShare to Pinterest
Labels: Daycare options for SD52 in 2016-17