The public had its final opportunity to offer up some thoughts on the city's Annual Report for 2015, as City Council opened the floor to commentary as part of Monday's Committee of the Whole session.

With two weeks to review the document, only one resident took to the microphone on Monday with questions or suggestions for Council related to the preparation of the annual document that highlights the City's achievements and work in 2015.

The session began with a short review by the City's Communication Manager Veronkia Stewart who outlined the process required to adopt the report, followed by the public comment opportunity.

Larry Golden, a frequent speaker at Committee of the Whole public comment sessions put some of his focus on the area of the CityWest financials that were included in the report, seeking clarification on the financial benefit that was delivered to the city by the communication company, asking whether that was considered a dividend or loan repayment for the City.

The City's Financial Officer Corrine Bomben provided some background on the CityWest content of the Report, noting that this year there will be a loan repayment by the communication company, confirming for Mr. Golden that the money coming in is not considered a dividend. 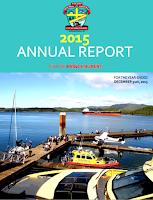 Mr. Golden also had questions and comments related to pay parking in the city and offered up some suggestions for Council to consider for the future.

Noting the main approach of the Annual Report is one of basic financial information, with little in the way of a more comprehensive review of such areas as the number of residents making use of the city's recreation facilities, or a wider overview of the crime statistic notes from the City's RCMP detachment.

Towards those themes, Mr. Golden suggested that the City should return to the days of having officials from such areas as the Recreation Department, RCMP detachment and Fire Department provide a public review of their departments at Council sessions, where questions could be asked and more information shared with the public.

Following those observations and with no other residents weighing in with any comments City Council later voted to approve the 2015 Annual Report.

You can examine the full document here.

You can review the nine minutes or so of conversation related to the Annual Report from the City's Video Archive, it begins at the opening of the Monday night session.

Further background on City Council issues can be found on the our Archive page here.
Posted by . at 10:17 AM

Email ThisBlogThis!Share to TwitterShare to FacebookShare to Pinterest
Labels: Comments on Annual Report