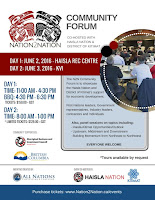 The theme of development on the North Coast has made for much of the discussion at this weeks Nation to Nation Forum taking place at Kitamaat Village, with the Haisla community making for the latest stop in what has become a fairly regular gathering of area officials.

The event hosted by the Haisla First Nation and District of Kitmiat has brought together a cross section of community leaders, politicians and industry officials to share ideas and discuss a number of issues.

Thursday afternoon found Prince Rupert Mayor Lee Brain a participant in one of the scheduled forums, with Mr. Brain offering his insight into issues of development.

Taking part in the mid afternoon discussion on upstream, mid stream and downstream LNG development, Mr. Brain offered up a number of observations in response to questions from the audience and the forum moderator.

He offered up his thoughts on the range of downstream LNG development projects proposed for the Prince Rupert area. On the general theme of LNG development, Mayor Brain observed that the key for  investors is political stability, something that Canada offers. With the city developing its own planning process to prepare the way for any potential investment in the North Coast.

The theme of First Nation engagement on issues of LNG made up for a segment of the discussion with Mayor Brain noting that the City works with at least six local First Nation communities, and while the City is generally supportive of LNG in the region, there are a number of socio-economic issues that must be examined as part of any prospective industrial growth.

Mayor Brain also directed some of the focus of his comments towards the City of Prince Rupert's LNG GO Plan, the recent population survey that the City conducted and other economic models that the City has developed in preparation for that growth.

As well he provided an overview for the audience into the severe drop in population in recent years and the impact  and challenges that has delivered to the community. As well, he delivered a look at some of the recent moves that the City Council has worked on in recent months when it comes to land use and preparation for major industrial development.

One of the elements that the Mayor expanded on during his time on stage was a look at the ReDesign Rupert initiative that the city has launched and how such policies as those related to residential planning and industrial growth policies can work when it comes to potential growth.

On the topic of the proposed Pacific NorthWest LNG development at Lelu Island, Mayor Brain navigated carefully around the issue that at times has proven to be quite controversial.

Noting that there had been a leadership change of local government in Lax Kw'alaams, which has provided for a shift in the approach in that community towards the proposed LNG terminal. Though he did note that there were still a number of residents in the region, particularly those in Lax Kw'alaams that have concerns over the placement of the Terminal in the Skeena River estuary and the possible impact that it may have on fishing resources in the region.

The Mayor provided a geography tutorial for the audience, reminding them that technically the Lelu Island project is located in Port Edward, a separate municipality just outside of the city limits. Providing some thoughts on the nature of the science related to the project and how he has confidence that the new leadership in Lax Kw'alaams is taking the right approach and will be hearing everyone out and will be re-engaged in the process.

Mayor Brain expanded on how the City is approaching its planning for the community, with goals of retaining heritage aspects and increasing the capacity of walking trails, parks and other amenities, noting how the City has to carefully redesign the development process, looking towards having developers come to town and approaching the city to see what the community wants to see developed.

A segment of his overview noted that Prince Rupert is notorious for finding people coming to town that outline that they are going to do something and then not following through with those ideas.

He also outlined how the City is currently sitting on three thousand lots at the moment, as it waits to see how industrial development progresses in the community. Adding that the city is trying to educate developers to provide the kind of housing and commercial developments that residents are seeking and what the city wants to see.

When it comes to any Final Investment Decisions for proposed LNG projects on the North Coast. Mayor Brain noted that one could come this year or  that perhaps the process may last as long as five years, noting that the city's planning will be in place to address any positive outcome whether it be LNG related or otherwise.

In response to a question related to public engagement, the Mayor offered up some observations as to whether people in the region are fully engaged or informed about the issues related to up stream and downstream development, noting that there is a need for more education on the issues.

He suggested that there has been an underestimation as to the amount of engagement that was necessary to understand the science and logistics and that people that are self motivated will seek out the information and will spend the time to take it in.

He offered up some thoughts on how people have viewed information from LNG proponents and those that have been expressed by those in opposition to the developments and how that shades much of the discussion on the themes.

The Mayor closed his contribution to the forum with some final thoughts on the need for education on the nature of the development plans, but adding that in the end it would be up to the science of the proposed developments that will determine how many will move forward in the region.

Mayor Brain was joined on the stage for the afternoon session by David Keane the President of the LNG Alliance and Greg Cano, Project Director for Coastal Gas Link , those two representatives offered an expansive look at the impact of the LNG industry on the province and the Northwest.

They provided some background from an industry perspective as to the challenges and opportunities that the LNG industry can bring to the entire region, as well as some of the engagement that they have been involved in with First Nations across Northern British Columbia.

The upstream/midstream/downstream Forum session involving Mayor Brain is available for viewing from the Munro/Thompson Twitter feed of the event.

For those that use to the Periscope Video Streaming system, the full Nation to Nation Forum has been streaming live through the event, archived material from the two days, including the Forum involving Mayor Brain can found here.

More video resources and other information related to the two day event can be accessed from the Munro/Thompson twitter feed or that of All Nations Consulting, which assisted in the organization for the event.

We offered up a preview of the two day event on the blog yesterday, the event came to an end over the noon hour today. The final hour of the event featured an appearance from Premier Christy Clark who stopped in to the event to take in the final session of the gathering and  to deliver the day's Keynote address.

Many of the themes that the Mayor touched on for the Kitimat audience can be reviewed from our City Council Archive page.

Email ThisBlogThis!Share to TwitterShare to FacebookShare to Pinterest
Labels: Mayor Brain at Nation to Nation forum