Final numbers for 2015 show $1.3 million in Community Grants distributed by the City

Five organizations made it into six figures when it comes to the City's Community Grants and contributions allocations for 2015, the final numbers for the year ended December 31st, 2015 were released this week as part of the City's Statement of Financial Information.

Leading the list is the Prince Rupert Library which accounted for close to half of the entire 1.3 million dollars that the city distributed as part of their 2015 listings.

The Library received $566,000 with an additional $9,000 directed towards the Prince Rupert Library Vested Benefit Accrual category.

Tourism Prince Rupert was next on the list of groups that benefitted from the city's financial assistance with the Hotel Tax delivering $210,769 to the organization, while the Visitor's Information Centre received $13,500 from the City.

The Prince Rupert Golf Society received two instalments of funding with the Society gaining $93,000 for its operational uses, while the capital requirements for the Society were assisted by funding of $49,861

Fifteen other organizations shared varying amounts of grants and contributions for 2015. 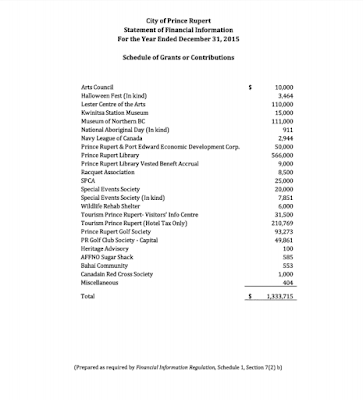 The Community grant list is included in this year's SOFI report, you can review the full document from the Agenda for last night's Special Council Session it begins on page 9.

Further items related to the City's finances and Budget planning can be reviewed here, while an overview of past discussion topics at City Council is available on our archive page here.

Email ThisBlogThis!Share to TwitterShare to FacebookShare to Pinterest
Labels: Community grants and contributions for 2015