The Australian energy company Woodside is seemingly still quite bullish when it comes to its LNG related plans for British Columbia, with recent news reports out of Australia providing a glimpse into what the company is thinking when it comes to development in the province.

And while a quick scan of other financial entries from the Australian press notes that Woodside like many in the energy sector is finding any number of challenges of late when it comes to its investment planning, the Australians still seem inclined to explore options both at home and abroad.

A corporate video released in recent weeks, highlights the global reach that the company is taking on as it looks to deliver natural gas resources to markets in Australia and Asia.

That continued interest in finding new resources has brought Woodside to the North coast, where the Australians currently have two percolating proposals for LNG development, one located in Kitimat and the other just up the shore from Lax Kw'alaams at Grassy Point.

The Kitimat proposal is a joint venture with Chevron, one of a number of LNG projects for that area with Haisla Chief Councillor Ellis Ross still has hopes of seeing developed.

The Kitimat option was the subject of a portion of the company's Investor's Day presentations in May, you can review some of the notes on that theme from pages 59 - 62 of the Briefing notes for that event.


For the North Coast option near Prince Rupert, Woodside officials are reaching out to First Nations communities from across the region including Metlakatla and Lax Kw'alaams, seeking their support for their plans for development of the Grassy Point project.

The Globe and Mail's Brent Jang provided some of the background to the Woodbridge approach with an item on Wednesday, noting that the Australians will be setting aside extra time to meet with both Lax Kw'alaams and Metlakatla to move

The efforts from the company related to Grassy Point can be explored further from the webpage they have created for the proposed development. 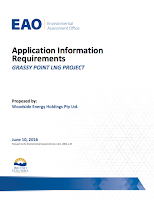 The application is a requirement that makes up part of process required to process towards an Environmental Assessment Certificate.

The introduction to the project opens the documentation and provides the thumbnail sketch of what Woodside has planned for the area north of Lax Kw'alaams.

Grassy Point LNG is proposed to be implemented in two phases. Phase one being the foundation project, is planned to produce between 6 to 15 million tonnes per annum (Mtpa) of LNG. Phase two would increase overall capacity up to 20 Mtpa of LNG. The number of LNG trains (process systems) will be determined during the detailed engineering and screening studies to optimise construction cost and operating efficiency. Product is planned to be exported from the facility to global markets via ships.

The scope of the nineteen different sections covers all aspects of the proposed development from Environmental Assessment methods, conservation of heritage effects, employment opportunities an public consultation and engagement with Aboriginal communities to name some of the areas which the document puts a focus towards.

The full document can be examined here.

The movement today on the Grassy Point project marks the first notes of interest in recent months for either of  the Woodbridge North Coast projects, offering up some signs of progress for the LNG files of the region.

You can review more on both of the North Coast proposals from our archive pages below.