An additional two million dollars in provincial funding was announced today by the Province of British Columbia, the increased funding to be directed towards the Highway 16 Transportation Action Plan which was introduced in December of 2015.

Among some of the areas where the money will be put to use include expanded or new public transit services along the Highway 16 corridor, a community vehicle grant and operating program, a First Nations driver education program, increased transportation safety through new transit shelters and webcams and increased collaboration between existing transportation service providers along the highway between Prince Rupert and Prince George.

A combination of federal and provincial funding is being put towards the program which will provide an update on its timelines for delivery of services later in the year.

Mary Teegee, the executive director for Child and Family Services with the Carrier Sekani First Nation noted the progress being made on the need for a shuttle service along the Highway.

“It has been 10 years since the Highway of Tears Recommendation Report came out and we are finally making progress on recommendation number one, which was to provide a shuttle service along Highway 16. I view transportation as a basic human right, and all people in the north should have access to services that are currently enjoyed by the rest of B.C. I am very pleased that we are making progress to provide safe transportation in northern B.C. This initiative is a good example of what can occur when there is collaboration.”

While the day's announcement did not provide details as to what any kind of a shuttle service might look like once in place, one of the main highlights of the progress made, offers some notes related to the recent signing of a Memorandum of Understanding to move forward with new transit routes for the corridor.

From that overview is the notice that with local government support, BC Transit Service will be introduced from community to community along the highway 16 corridor from Prince George to Prince Rupert, with BC Transit looking to have the first buses in service by the end of the year.

Of note to the planned Transit Expansion program is a segment for the Northwest, which lists a proposed service between Prince Rupert and Terrace. 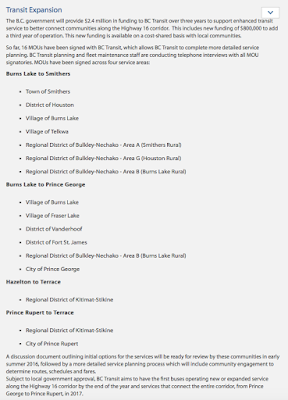 “We want to see northern communities connected with safe, reliable, and accessible transportation options, in particular providing better and safer options for women and teenage girls. There are five different components to this plan, which complement each other to support safer public transport in First Nations communities and municipalities in the north. The advisory group has been working diligently on implementation plans, and today we are actively moving forward on all five steps in a significant way.” -- Todd Stone, Minister of Transportation and Infrastructure announcing additional funding on Wednesday towards Highway 16 transportation initiatives

North Coast MLA Jennifer Rice has long been an advocate on the issues related to Highway 16, in particular she has focused much attention in the past on the need for a shuttle bus between Prince Rupert and Prince George.

She has not as of yet, issued a statement on today's announcement from the Provincial government.

Some of her past efforts and comments on the issue can be found on our Legislature archive page.

Update: On Thursday June 16th, Ms. Rice issued a statement on the funding announcement from the Provincial government, more background on her thoughts can be found here.
Posted by . at 3:09 PM