Nathan may say No, but his supporters look to change his mind 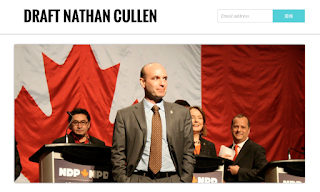 It seems that when it comes to seeking a new leader for the federal NDP some supporters of Nathan Cullen aren't quite ready to accept a No.

As we recounted on the Blog on Saturday, the MP for Skeena-Bulkley Valley outlined his reasons for turning away from the leadership in a media session on Parliament Hill Friday afternoon, citing what's best for his young family, the realities of representing a large rural ridding and seeking to finish his work with his constituents as the key elements of his step back.

However, even in the wake of last Friday's announcement Mr. Cullen's legion of supporters are stepping up their efforts to provide him with cause to reconsider, launching an online petition calling for a Draft Cullen campaign to show the MP that he has a large amount of support with the party membership.

The petition which first became public late Monday expresses a theme of the need for progressive leadership for the party at this time.

"While we respect Nathan Cullen's announcement that he will not be seeking the leadership of the federal NDP, we hold out hope that he will reconsider his decision.

NDP officials have stated that they are unaware as to who is behind the petition, which as of early this morning had reached 73 signatures towards the modest goal of 100

You can review the full petition here.

For his part, Mr. Cullen has reinforced is decision not to seek the leadership at this time, telling the National Post that the initiative is flattering, but that it's not going to sway his opinion. He also notes that it won't be long before NDP supporters will have a growing number of options to choose from when it comes to a replacement for Tom Mulcair.

This week saw the first of the would be leadership candidates launch her campaign, kind of, sort of.

Yesterday, Toronto area MLA Cheri DiNovo declared herself an "unofficial candidate, calling the NDP's policy of requiring a 30,000 dollar candidacy fee as against social democratic principles and seemingly looking to enter the race without having to follow many of the NDP's rules.

Should the remainder of the field feature relatively unknown candidates, with little in the way of national presence and a few unusual thoughts on how the leadership process should run, then the calls for Mr. Cullen to reconsider may grow louder.

Something which may bring more petitions to come to try turn it's not never, it's not now into the time is now.

You can explore more notes related to national politics through our political archive of D'Arcy McGee found here.

Email ThisBlogThis!Share to TwitterShare to FacebookShare to Pinterest
Labels: petition calls for Nathan Cullen to return to NDP race