The wrap to the 2016 Prince Rupert Youth Soccer Season comes up this Saturday as a full day of action is set for fields around the City.

Players and coaches have been on the pitch since April 4th, developing their skills and facing any number of challenges from the weather this year which at times made Youth Soccer seem like a winter sport, rather than a spring time pursuit.

All the practices and games however are soon to be in the books for 2016, with Saturday offering the last of the kicks at the ball for the league this season.

Saturday's Play Day will make use of two venues, with both the Roosevelt Field and Charles Hays in use through the day to put a wrap on things.

Soccer players in the U6 to U 10 Divisions will be taking to the pitch at Roosevelt Field in the Francis Loeppky Memorial Soccer Play Day starting at 9AM.

The action continues through the day until the final kick of the ball from 4 to 4:30 when the kids take on their parents and put the elders' fitness levels to the test. 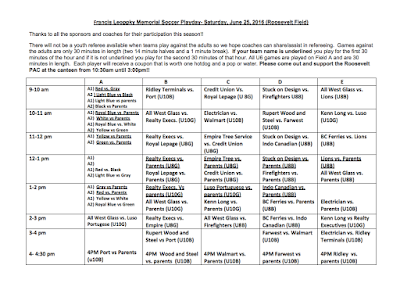 Charles Hays field is the host of the Under 12 Play Day with the opening game set for 10AM, the match up with parents at CHSS will run from 4:15 to 5 PM on the three fields at the high school. 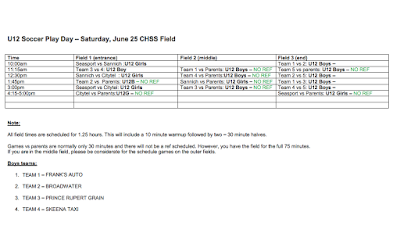 And while the soccer season is coming to an end, there will be some summer opportunities for players to work on their skills over summer vacation.

Northern Savings is once again offering its annual Goalgetters Soccer Camps across the region this summer.

While the City of Prince Rupert is hosting it's British Soccer camp in August as well, you can find out more about that program from the City's recreation department.

Some notes on the season can be found on our archive page here.
Posted by . at 7:50 AM