SD52 sets schedule for Board meetings for next year, but no update on plans to fill vacant seat


School District 52's Board of Education hosted their final public meeting for the current school year last week and following that Tuesday evening session provided a recap of their discussion points last week.

Among some of the main points from that report were some notes related to their spending plans for the year ahead, as well as an update on increases in Daycare options at local schools.

We  made note of those items yesterday on the blog see here and here, culling the highlights from those talking points from the final Board meeting.

Also released in that report was the calendar for next years' School Board Council sessions, which will see the board meet for a of total ten public sessions, including the need for a rescheduled session to account for the recently introduced two week spring break. 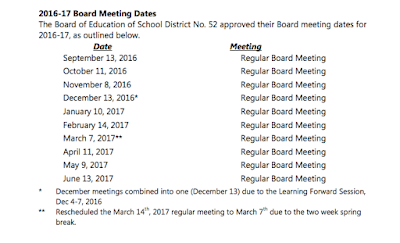 Left unresolved however from this year, is a fairly important issue, that of the inability of the School District to reach some kind of agreement with the City of Prince Rupert when it comes to providing for a full complement of School Board trustees this year.

Not mentioned in their review of the final meeting of the year was what the School District plan may be to bring the number of trustees back to the full complement of seven.

A number that hasn't been counted in attendance since trustee Judy Carlick Pearson took her leave in November.

For the majority of this past school year, the School District board ran one elected official short, while the SD52 administration and city council exchanged letters and held meetings on the theme of how and when to conduct a required by-election.

The issue now isn't quite as pressing as it was a few months ago, back when the School Board could possibly have use an extra set of eyes and ears, as well as one more voice on its budget discussions and other controversial moments of the year.

So the summer break perhaps will give officials a chance to regroup with their municipal counterparts and determine a course of action. Allowing for some kind of indication in September as to when parents might be able to cast a vote to reach the required number of trustees to tend to those tough decisions that are still ahead.

Notes from the June 14th School District meeting can be reviewed here.

More Background  on the 2015-16 school year can be found on our archive page.

Email ThisBlogThis!Share to TwitterShare to FacebookShare to Pinterest
Labels: SD sets calendar for meetings in 2016 and 2017, SD52 byelection