A review of the state of the LNG industry at the mid point of 2016 by the International Energy Agency won't be making for popular reading for the Premier or Natural Gas Minister Rich Coleman, as the IEA review notes the ongoing struggles of the LNG sector.

The report's themes outline a scenario of reduced demand in the short term, as well as indications that the troubling times facing the industry will continue, something that should be of some concern for the BC Liberal government that had hoped to see some forward momentum for it's LNG plans by now.

While the Canadian hopes don't rate a large review in the report, the forecast for the future paints a rather worrisome trend for the province's agenda when it comes to the industry.

The IEA report observes that with American and Australian projects now delivering LNG supplies to the world, the next five years will bring a reshaping of the global trade in natural gas.

“We see massive quantities of LNG exports coming on line while, despite lower gas prices, demand continues to soften in traditional markets,” ... These contradictory trends will both impact trade and keep spot gas prices under pressure.” -- IEA Executive Director Fatih Birol in a forward to the agency's June report on Natural Gas trends.

The rise of the industry in both Australia and the United States is noted by the IEA as something that is find those two nations as to soon to be among the largest of LNG exporters.

While gas demand is projected to remain weak, global LNG exports will increase substantially. Between 2015 and 2021, liquefaction capacity will increase by 45%, mostly from the United States and Australia. New projects in both countries have commenced ramping up production. Several others are at an advanced stage of development. By 2021, Australia will rival Qatar as the world’s largest LNG exporter and the US will not be far behind.

The introduction to the report also observed that low oil and gas prices will continue to provide challenges for the LNG industry through the next decade, something that could see the continued collapse of investment.

Dr. Birol warned that today’s oversupply could foreshadow a number of supply-side challenges and security risks down the road, noting that a growing level of LNG export capacity had gone offline during the past five years due to technical and security issues and that such problems could get worse with low oil and gas prices. As producers slash investments to refocus on cost reductions and budget savings, he said that such efforts may be too late for global gas markets to rebalance during this decade, but could sow the seeds for tighter markets into the next decade. 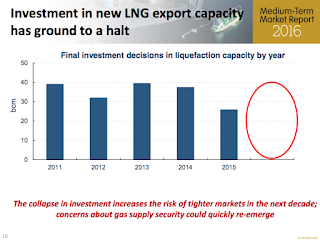 There is some hopeful news for Canadian plans with the IEA Report observing that projects proposed for British Columbia could move forward if demand and prices recover. The full executive summary to the report can be reviewed here.

A snapshot of Dr. Birol's introduction of the report can be viewed here.

The forecast by the International group could make for some major shifts in positions when it comes the long list of the proposed developments for British Columbia, many of them of some interest to residents of the North Coast who have been tracking the LNG story for the last few years. In the lsat few years there has been a high level of anticipation found around the community amidst talk of major project planning and hyper economic growth coming from local municipal officials.

The industrial review by the IEA caught the attention of Business in Vancouver Magazine this weekend, with a story taking note that the worsening economic conditions for the LNG industry could make for a pause in the plans by Petronas for their proposed Pacific NorthWest LNG terminal at Lelu Island.

In their Friday article, the magazine suggests that British Columbians should expect more delays for the project, highlighting a portion of the report from the IEA that noted that a federal decision is not now expected until September and that the project seems likely to be delayed.

That proposed development has been stalled in a legislative limbo of late, with the CEAA still reviewing requested documentation on the project before handing the file over to the Federal Cabinet for a decision on the future of the terminal proposal.

Neither Pacific NorthWest LNG or Petronas have offered up any statements on the status of their application to this point, nor have they delivered any remarks related to the IEA report.

You can review more on the Pacific NorthWest project from our archive page, while further background on the scope of the proposals for the LNG industry in Northwest BC can be found here.

Email ThisBlogThis!Share to TwitterShare to FacebookShare to Pinterest
Labels: IEA Report offers reduced expectations for development of BC Industry at the moment