Three Prince Rupert based representatives of UFAWU-Unifor are in Ottawa today, making an appearance at the House of Common's Standing Committee on Fisheries and Oceans, with Joy Thorkelson, Arnold Nagy and Conrad Lewis set to take issues related the North Coast fishery to the federal government.

The topic will feature a request that the federal government align its West Coast policy around adjacency, fleet separation and owner-operation, bringing the West coast policies in line with those currently found on the East coast.

They three Northwest reps will be looking to highlight for the committee how the three key elements of their concern impact the North coast fishery.

Adjaceny, a process that would require that fish be processed in areas where it is caught

Owner Operator issues, to ensure that a fishing licence or quota must be fished by the owner

The three issues are key to the current concerns related to the closing of the Canadian Fish Cannery on George Hills way, with the union continuing with its efforts to find a way to keep the cannery as an ongoing operation on the North Coast.

Nathan Cullen the, MP for Skeena-Bulkley Valley has hailed the appearance of the two UFAWU-
Unifor reps as an important step in bringing the issue to the attention of the Federal government and seeking a fair solution for the workers of the North Coast.

"There's a lot riding on this meeting. Made-in-Ottawa policies that allow North Coast fish to be processed in China and Alaska and almost 80% of commercial licences to be bought up by large corporations are killing our coastal communities. ...  These regulations favour big business at the expense of individual boat operators, they move money out instead of into resource communities, and they have led to hundreds of cannery job losses, with another 500 jobs on the chopping block if the Canfisco closure proceeds.”" -- Nathan Cullen highlighting the themes of a Tuesday presentation by Prince Rupert representatives of UFAWU-Unifor in Ottawa.

The MP issued a media release on Monday noting the importance of the presentation to the Standing Committee. 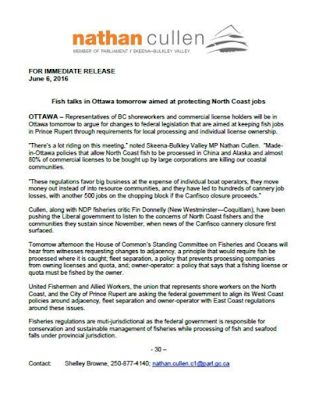 You can listen in on today's session from the audio archive from the Committee session here.

A look at the work of the Standing Committee on Fisheries and Oceans can be reviewed here.

As well, more background on the UFAWU-Unifor position can be found from their Facebook page.

We offer up this overview of the North Coast Fishery from our archive page.

Email ThisBlogThis!Share to TwitterShare to FacebookShare to Pinterest
Labels: UFAWU-Unifor reps in Ottawa to take fishery issues to Federal Committee