City's Annual Report ready for inspection and comment by the public 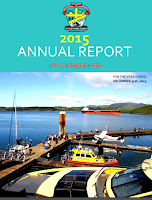 Prince Rupert's year in review is now ready for your reading pleasure with the City of Prince Rupert publishing the 2015 Annual Review,

The city's communications Director Veronika Stewart provided the introduction to the recently completed document at Monday's City Council meeting, noting for Council that the public can now review the document with a public comment opportunity to be set for the June 27th Council session.

Councillor Joy Thorkelson hailed the Annual Report as one of the most important documents that the city puts out each year, providing an overview of the workings of the City and delivering some of the city's strategies and how Council has fared when it comes to achieving them.

She did note for Council that this years version is a bit of a different format than in previous years, but is a report that residents should take some time to look over.

"I always want to think that the Annual Report is one of the most important documents that the city puts out it has what the Finances are, people want to know what we have spent our money on. There are very detailed financial statements included in the Financial report. It also sets out what our objectives were for 2015 and we measured against them, and what they objectives are for 2016" -- Councillor Joy Thorkelson offering some observations on the nature of this years Annual Report

The 2015 Annual Report is divided up into seven different sections, including a full  page commentary from Mayor Lee Brain, as well as an overview of the year from City Manager Robert Long.

The Mayor's notes carry on with his recurring theme of building on our vision, with Mayor Brain looking back through 2015 to such initiatives as the Go Plan Survey,  Land Use policies and a shout out once again for the Hays 2.0 vision, described as a bold and forward thinking plan that will ensure we become more resilient in the future.

Also given a prominent place in this years correspondence to residents is the work of Re:Build Prince Rupert and ongoing efforts towards the replacement of aging infrastructure, along with a reminder that the City did not raise property taxes for 2015.

Other achievements of note flagged by the Mayor include the construction of the new Cow Bay Marina, the continued dismantling of the Watson Island mill site, as well as the City's efforts along with local community groups to revitalize the McKay Street Community Park.

Also noted in the Mayors commentary is the development of the 2030 Sustainable City Committee, as well as the Small Business Advisory Committee, along with ongoing engagement with area First Nations on share interests such as the Tsimshian Access Project.

The City Manager's contribution provides a glimpse into his duties as he oversees a staff of over 200 civic workers, with Mr. Long hailing the building of relationships between management and union staff over the last year.

His most memorable moment from 2015 appears to be the development of the policy related to planning for Major Projects, which is described as integral to preparing for potential growth and good planning to create policies that enable the City to manage how that growth plays out.

Beyond the two reviews from Mr. Brain and Mr. Long, the Report offers up a look at each of the City's Departments, with background information and reports from fourteen different areas of civic interest among the 60 pages of the document.

The last stages of the report features a look at a number of City financial items, including the Audited Financial Statements, 2015 Permissive Tax Exemptions and Community Enhancement Grants to Community Groups among the listings.

The year in numbers page which is found at the start of the report provides an interesting glimpse at some of the key areas that Council has decided to direct our attention towards this year.

Included as the items of note for residents are such things as:

The city's growing use of social media rated a mention in the Annual report
with the City noting an increase to 1,012 "likes"on the City's Facebook page in 2015

And while residents  may find it hard to believe, particularly if they walk along stretches of Second and Third Avenue in the downtown core, the City celebrates the issuance of 1,085 Business Licences in the last year as part of this years information flow. 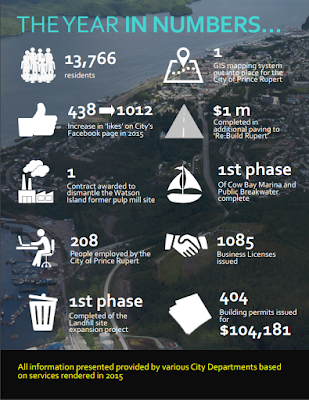 You can review the introduction of the Report to Council and the discussion around it from the City's Video Archive from Monday evening, starting at the one minute thirty second mark.

Residents with any comments or concerns related to the reading material can take advantage of an opportunity to comment for the public taking place at the June 27th Council session, the public comment period is a requirement prior to the final acceptance by Council of the report for 2015.

For background on items of discussion at City Council see our Council Discussion page here.