A shift in View when it comes to the local paper and City Council?

Prince Rupert's weekly newspaper took a bit of a shot at City Council last week with an editorial page submission that in effect told Council to be thankful that they have the Port of Prince Rupert around when the going gets tough.

A Wednesday editorial in the Northern View from Publisher/Editor Todd Hamilton which went by the title of "What would Rupert do without the PRPA" highlighted the recent announcement on the resolution of issues related to the Payments in lieu of Taxes process.

The article for the most part praises the Port for its approach on the issue, at times in the face of some hostility from those on City Council both past and present.

Some of that theme of past animosity and suggestions of obstacles to development make for a correct overview of the situation and mirror some of the observations that we've traced a number of times over the years on the blog.

The editorial from Wednesday however seems to shift the paper's tone from its recent coverage of city politics, which in most instances has filled the role of helpful delivery system for some of the city's message making.

Two things of course should be noted about the papers editorial stance, while they make note of the financial benefit that the Port has provided to the City of Prince Rupert, the PRPA would seem to be one important source, if not the largest one, of advertisement in the weekly paper.

Through frequent ad placements both in print, on line and with the Black Press feature N2K, we imagine that the the Port has become a helpful revenue stream for the local publication.

As well, as last week's Statement of Financial Information noted, the City has also done its share of supporting a local business, directing a growing amount of advertising towards the newspaper's bottom line, with the city having spent $55,923 in 2015 with Black Press in the community.

And while it's interesting to review the publisher's thoughts on the City and how both this current council collective and those of the past have addressed the issues with the Port, it probably might resonate more for the readers if the paper actually covered City Council in a more extensive fashion.

For the most part, the paper's coverage of anything out of City Council over  much of this year and even in the year previous has been reduced to a few short articles following a council session, lately combined with the brief from Port Edward.

A search of the paper's own website offers up a bit of a testimony to the reduced output when it comes to their attention to municipal items.

Those that do make it to the publication phase, for the most part tend mainly to put forward the theme of momentum on council issues. A form of coverage that seems to follow the City's narratives.

And those positive vibes have been reciprocated by the Mayor, who frequently cites articles in the weekly paper that highlight the latest talking point from City Hall, making it part of his growing social media footprint, whether on Facebook or twitter.

The City has also been quick to make use of the weekly paper as a form of information delivery, using paid advertising as part of its public relations strategy to raise awareness of its plans and projects.

A companion outlet of sorts to go along with City's communication department which has been active in shaping the perceptions of the city's approach on civic issues and more.

However, last weeek it seems that the percolating partnership suffered a bit of a step backwards. 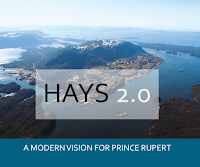 The most interesting note from the June 29th editorial was the final line, which directs a bit of snark and shade towards the Mayor and City Council's hopes for the Hays 2.0 vision plan, perhaps one of the most trumpeted of civic initiatives since this Mayor and Council took office in 2014.

"Now, if only the city can double down on its newfound pragmatism and spirit of cooperation to publicly support LNG and get Watson Island off the liability side of our balance sheet, we just might have the foundation for a real Hays 2.0 " -- From the June 29 editorial in the Northern View

We suspect that those editorial page thoughts of last week on the Port/City dynamic won't get quite as much interest as a recent editorial from the weekly on the theme of Lelu Island, a composition which found some additional exposure on the provincial scene from the political website the Tyee.

The controversy that was generated over the Lelu island article delivered a clarification last month through the editorial page.

Still, one imagines that at some point, the publisher's overview of the Port/City relationship will be on the reading list for the members of City Council.

Interestingly enough, unlike recent stories from the paper, Wednesday's editorial wasn't offered up a place in the Mayor's Facebook feed this past week, suggesting perhaps Mayor Brain and members of Council haven't had a chance to review the column, or been able to find it.

To this point it surprisingly has not been posted to the Opinion page archive of the Northern View website.

So, unless you have wrestled the paper away from the pets, or have taken on the challenges of navigation required from the e paper concept that the website offers up, you may not be aware of the rebuke of the City and its relationship through the years with the largest employer of the region.

You can catch up on the new thread of conversation through the editorial which can be found on page A6 of the E edition version of the website. 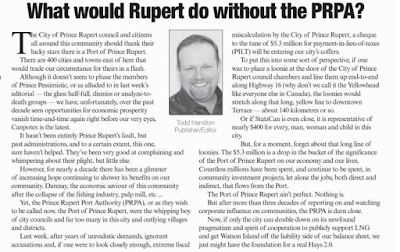 For a look at our past items on municipal government in Prince Rupert, we invite readers to check out our archive page here.

Update: Mayor Brain provided his thoughts to the Northern View's editorial stance with a letter which you can review here.
Posted by . at 1:35 PM