The City of Prince Rupert was not the only local government body that was required to present its Statement of Financial Information last week, a process delivered to Council at a Special meeting called for last Wednesday at 5 PM.

Skeena-Queen Charlotte Regional District also has posted its Statement of Information for 2015 to its website the table of payment included in the Agenda package for their June 17th meeting..

Among the listings of the financial are the compensation levels for three members of Prince Rupert City Council who were the recipients of some salary top ups top ups to go along with their Prince Rupert pay packages.

Sixteen representatives serve as members of the Regional District, either as Elected officials or alternate members of the Board of Directors for the often overlooked level of government.

Skeena Queen Charlotee Regional District covers a vast part of the geography of the region stretching from the North Coast across to Haida Gwaii.

When it comes to compensation levels for their work SQCRD Chairman Barry Pages receives the highest remuneration at Regional District, with the SOFI report listing his Salary at $20,088 and expenses listed at $13,733 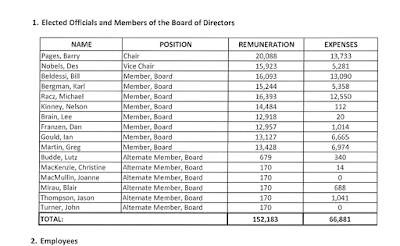 As for the Prince Rupert contingent that worked on Regional District files through 2015, three members are listed in the 2015 SOFI report.

Prince Rupert Councillor Nelson Kinney received remuneration of $14,484 for his work as member of the SQCRD regional Board, claiming $112 for his expenses with that body.

Mayor Lee Brain is listed as having received remuneration of $12,918, with expenses of 20 dollars in the last year.

That additional $12,000 propels the Mayor over the $100,000 dollar mark when you combine the amount of $96,000 in salary and expenses listed as part of the Prince Rupert SOFI and the financial disclosure from regional district.

Those are numbers that make the Prince Rupert Mayor far and away the highest compensated elected official on the municipal scene across the Northwest.

The jump in salary for Mr. Brain in 2015 came as City council voted to shift his position from that of a Part time one, to that of Full time status last year.

A look at the comparisons for some of the communities of the Northwest can be found below, all would also receive some form of compensation for their Regional District duties:

Terrace's information is proving a little harder to find through its website, with no SOFI listed in the index of the city's website as of yet for that community.

However using some numbers forecast for 2015 found in the Terrace Standard from 2014, an estimate of Mayor Carole Leclerc's salary gives us an idea as to what her range may be. Terrace has in the past considered making the Mayor's position a full time one and it's a theme that frequently gains attention and some discussion in that community.

Like the City of Terrace website, the Kitimat-Stikine Regional District portal does not appear at this point to have provided a final document on SOFI.

Terrace
Statement of Information (not posted to website yet)
Mayor Carole Leclerc
Municipal Salary  -- $34,500 (plus expense listings)
Regional District -- (not posted yet)


A little further down the highway finds the remuneration level found for the top job in Prince Rupert closing in on the salary levels of much larger communities around the province, a glimpse at some of those figures can be found below:

Providing counsel to City Council is also a rewarding calling in Prince Rupert, with City Manager Mr. Long among the top earners among the unelected officials with the City and holding his own compared to those in similar positions across the province..

With the SOFI declaration from last week outlining his salary at $254,797 in remuneration/taxable benefits and $26,846 in expenses. Those levels match up well with the pay listed from 2015 for other top civic executives around the province.

Some of those on the list below, have since moved on to other positions in other communities.

Politicians and civic officials can compare their pay stubs in late September, when all will gather at the annual UBCM convention. Taking a look at the results from this years financial overview, it would appear that Prince Rupert probably can pick up the tab on the first round at the opening night social.

You can follow developments on the municipal scene from our Archive page found here.