Candidates list is set for Metlakatla election in August 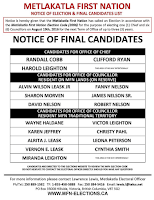 The final list of candidates for next months election in Metlkatla has been released with current Chief Harold Leighton facing a challenge from two residents of the First Nation community for leadership of the Metlkatla government.

Offering up their name in the quest for office of the Chief are Randall Cobb and Clifford Ryan.

The full list of candidates was released last week and in addition to the position of Chief Councillor, positions for on reserve council members and those living off reserve in the Traditional territory are also up for election.

Six candidates are listed for on reserve council positions they include:

Nine names are listed among those seeking election as resident of the traditional territory:

The August 19th election will fill the one position of Chief and six members  of Council.

Ballots will be available from 9 AM to 8 PM at two locations, the primary polling station of the Main Office building at Metlakatla Village and a secondary polling station at the Coastal Training Centre at 501 Dunsmuir Street in Prince Rupert.

Unlike the current municipal councils in British Columbia which shifted to a four year term after 2014 election year, the Governing Council for Metlakatla will continue to serve a term of three years in office following the August election.

More information related to the 2016 election can be found here.

You can review the background of the current Governing Council here.

Further items of interest from Metlakatla can be reviewed on our archive page.
Posted by . at 9:05 AM