Showing the Maple Leaf at Ketchikan's Fourth of July 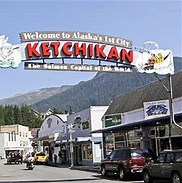 There was a small Canadian flavour to the 4th of July celebrations in Ketchikan on Monday, with Prince Rupert represented by the members of Royal Canadian Marine Search and Rescue Station 64 members, with Mayor Lee Brain also along for the ride to represent the City of Prince Rupert.

An account of the trip north was posted to both the Mayor's and Station 64's Facebook pages, providing some background some of their efforts while in Ketchikan.

The Search and Rescue station crew took part in some exercises with the US Coast Guard Station in Ketchikan (see notes here) and exchanged notes with members of the Coast Guard Auxiliary in the community as well.

As for the agenda for the city's Mayor, Mr. Brain took to his Facebook page with an update on his time in the city, where he took part in discussions related to the Alaska Marine Highway System.

Ketchikan's public radio stations KRBD offered up a short overview of the city's festivities.
Posted by . at 9:00 AM

Email ThisBlogThis!Share to TwitterShare to FacebookShare to Pinterest
Labels: Mayor and RCMSR 64 in Ketchikan for 4th of July