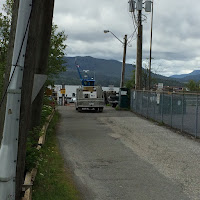 City Council members heard some background information on Wednesday related to two Grant Opportunities that City staff hope to pursue, with infrastructure money for the Fairview Dock of the Airport Ferry and funding for planning for disasters available and welcoming applications.

At a special council session of Council on Wednesday, the City's Director of Operations Richard Pucci outlined the main focus of a Grant application under the federal governments Canada 150 Fund program.

Mr. Pucci explained for Council the need for repair for the Fairview Bay side of the Airport Ferry system, noting how the current dock pontoons require daily monitoring due to their age and the extreme environment in which they are located. Noting that they are an essential piece of the transportation infrastructure and in dire need of replacement.

If the City is successful with its request for funding, the money provided by the program would be put towards reducing the cost to local taxpayers for the work that is required.

Councillor Thorkelson had a few questions related to the application, first asking what other kinds of projects were available and why they chose the Airport Ferry work for the grant bid.

She was advised that it has been on the radar for a number of years and how the airport ferry is an important part of the transportation infrastructure system and how it has been put off owing to cost.

The City's Financial officer observed that the proposed project was also part of the Capital Budget and with the funding announcement the city will be applying for the funding to cover it.

The City's Corporate Administrator also took advantage of Wednesday's council session to provide his overview of another grant opportunity this one funded by the Provincial and Federal governments for mitigation work towards natural disasters.

Mr. Rory Mandryk noted that the city could apply for a grant opportunity hosted by Emergency Management BC to access up to $450,000 for the first phase of the work to involve extensive risk assessments for a possible tsunami event. The program features four phases related to the steps involved in the process.

The cost of stage one would be accessed by the grant funding received by the program, no direct funding will be required by the city, it is anticipated that if successful in its grant award  that it will speak to additional grant funding being provided for the following three stages.

City Staff asked for guidance from Council as to whether to seek out the grant opportunity available.

Councillor Thorkelson raised a number of questions related to the proposed application, asking to the total cost of the work, noting that she has concerns when it comes to applying for funding but if the City doesn't have the amount in its budget to apply for matching funding they have to take it from other areas.

Mr. Mandryk noted that there is no need for matching funding for this proposal, that it is provided by the Federal and provincial governments, the Mayor adding that it is a fully paid grant.

Councillor Cunningham asked if the nature of the first stage of the risk assessment would be part of city staff's regular work or how it was planned to handle such an involved process and how much time would need to be allocated.

Councillor Thorkelson returned to the different stages of the project, asking what kind of commitment the City would have following the first stage. Mr. Mandryk observed that to follow that up with the further stages the City would have to apply for further funding opportunities.

Councillor Cunningham observed that after the risk assessment was complete the City would have a better understanding of how much further planning would be required.

Council voted to approve the motion to seek out the Funding from the program.

City staff will now prepare their applications and submit them to the two different funding programs, no timeline for consideration was provided as part of Wednesday's Council session.

More background on the twin opportunities can be found on the City Council Agenda for June 30.

You can examine the two proposals for funding through the City's Video Archive page.

Further background on City Council discussions can be found on our Council Archive page.

Email ThisBlogThis!Share to TwitterShare to FacebookShare to Pinterest
Labels: City to seek out funding for two initiatives