Prince Rupert's Screen test gets its national run tonight on CTV as the recent episode filmed on the North Coast and Haida Gwaii goes to air across the country.

The teams were assigned their tasks and took to the city's streets in May and while many of those at the host venues or assisting in the logistics of the day were sworn to secrecy, word eventually leaked out that the Amazing Race teams were in the city.

However in Prince Rupert, nothing remains a secret forever and from the first sighting of the day, Social media reports quickly tracked the participants progress as the teams travelled to such areas as the Atlin Terminal, Seal Cove, Prince Rupert City Hall and Port Edward's North Pacific Cannery Historical Site to name a few.

Members of the community who helped out as volunteers with the project will be celebrated at an invitation only viewing party at the Lester Centre this evening, a night hosted by Tourism Prince Rupert and the Prince Rupert and Port Edward Economic Development Corporation. 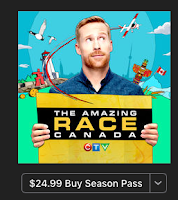 For the rest of us, there's always the television, showtime is 8 PM on CTV British Columbia, those with cable or satellite packages that off up eastern feeds can follow the program across the country.

If you're looking for a permanent copy of tonight's sixty minute pictorial of the North Coast and Haida Gwaii, episodes of the Amazing Race are also available for download from the iTunes store, tonight's episode most likely will be added to inventory by tomorrow morning.

A sneak peek at some of tonight's developments can be viewed below.

Some of the media reviews on the visit to Prince Rupert, Port Edward and Haida Gwaii can be found below: