Vancouver housing issues on the agenda for recall of Legislature

Vacationing MLA's in British Columbia will have to reschedule some of their plans for the end of the month, as the Liberal government recalls the Legislature later this month to discuss housing concerns in the Lower mainland.

The recall notice was issued on Monday by Finance Minister Mike De Jong, who noted that the main topic of the summer session expected to start on July 25th, will be the introduction of measures that enable Vancouver vacant homes tax and support consumer protection by ending self-regulation of the real estate industry.


NDP leader John Horgan wasn't very impressed with the call back to the Legislature, suggesting that the planned sitting was more about image than substance on the issues of housing in the province.

“Christy Clark and her government still refuse to address the impact of speculation on the market. We have already introduced legislation that would address that issue, and would help put much-needed funds into fixing the housing affordability crisis,”  -- New Democrat Leader John Horgan

While the major focus of the issue will be on Vancouver's problems, the return of the Legislature could offer North Coast MLA Jennifer Rice the opportunity to remind the governing Liberals that access to housing is an issue across the province and share the concerns that Prince Rupert City council when it comes to themes on housing.

Some of those notes from the Northwest can be found on the past pages of our Housing archive page.

Prince Rupert Council has made housing concerns a focus of some its work for much of the last year. However, so far, the subject is one that has been long in study and short in actual housing proposals, or shovels hitting the ground.

Ms. Rice could perhaps provide an extra push from the region to give Housing Minister Rich Coleman cause to make a trip to the area, an opportunity for the minister to explore the local issues and offer up some solutions for those working on the housing initiatives locally.

In recent weeks BC Housing has rolled out a string of housing initiatives in other BC communities, a mix of federal and provincial funding paving the way towards addressing some of the housing concerns in the province and might offer a guide for those on the North Coast looking to make some progress in our region.

The call back to the Legislature might require some travel planning changes for the North Coast MLA, who has been touring the region since the House rose in May.

Since the summer recess began, the North Coast MLA has spent much of her time on Haida Gwaii taking in a number of social and community events as her social media streams highlight. 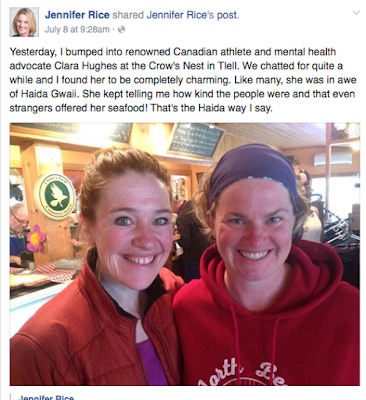 Ms. Rice was not the only high profile politician to be on Haida Gwaii this month Federal Environment Minister Catherine McKenna was also taking some personal time to explore the Islands. 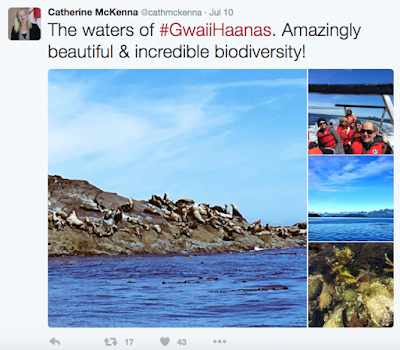 It's unfortunate that the two politicians didn't have a chance to cross paths, a lost opportunity perhaps for both to chat on themes of oil pipelines, oil tankers and LNG, to go along with potential shared notes on best places to wave watch and where the best hiking trails might be.

Ms. Rice was back in Prince Rupert over the weekend spending some time at Cow Bay Days on Saturday and later this week she is hosting a Brown Bag lunch session for residents that may wish to drop by Mariner's Park to share concerns or raise issues for her to take to Victoria.

The Brown Bag lunches have been scheduled through the summer, this month's is set for July15th from Noon to 1 PM, should it rain, the plan is to hold the meeting at Ms. Rice's constituency office on Third Avenue West.

Further background on the provincial political scene can be round on our archive page.

A larger overview of the Federal and provincial political notes can be reviewed through our political portal D'Arcy McGee.

Email ThisBlogThis!Share to TwitterShare to FacebookShare to Pinterest
Labels: MLA's to return to Victoria for summer session July 25