It's been a favourite topic of discussion for North Coast residents for a few years now; when will the proposed Mr. Mikes restaurant franchise make its arrival in Prince Rupert, and where will it be located?

The conversation around town started a few years back when the first of the Coming Soon signs began to pop up around the city. Once thought by many to be destined for the old VIA Rail station at the Rotary Waterfront Park, while others would point towards a sign at the Rupert Square that some divined meant that it was moving into the Mall.

All was resolved last week as the Rupert Hotel was officially rebranded as a Prestige Hotel.

During an Open House held to celebrate the hotel chains official Grand Opening of the refurbished downtown hotel, it was announced that Mr. Mike's had signed on to lease the space that once hosted the Johnny B's pub.

In recent weeks a sign heralding the pending arrival of the steak house was placed near the entrance to the closed pub, signalling progress towards the firing up the grill sometime in the future.

The placement of a restaurant as part of the Prestige hotel complex adds a dining option for hotel patrons and will give Prince Rupert residents one more choice for dinner planning when it comes to the city's vibrant food scene.

The Prince Rupert and Port Edward Economic Development Corporation saluted the pending arrival of the new dining experience, taking to the PREDC facebook page with the news, suggesting a timeline for development of sometime in the Spring of 2017. 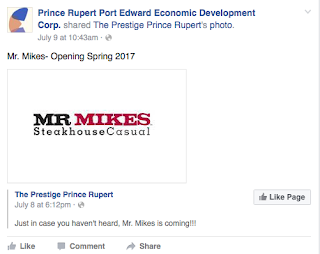 While North Coast residents await the renovations and Opening Day, we can check out the Mr. Mikes website to learn more about what taste temptations will be served up when the doors to Second Avenue West swing open.

More on Prince Rupert's Commercial sector can be found on our archive page.
Posted by . at 9:04 AM