The start of the summer months for the North Coast offered up a number of items for review over the last thirty days, including the closure of a popular sporting goods store as retirement beckoned, while a local automobile dealership expanded its offerings with an eye towards a positive future for the region.

Our June review of business and economic related items also features a look at a number of reports that were revealed this month, from a look at the annual Moneysense magazine findings for the city, to a review of the North Coast Cruise strategy and the impact of the Prince Rupert Port Authority on the local economy. As well, we take a look at the list of suppliers used by the City of Prince Rupert through 2015 and the impact on the local economy that local business has realized.

Some of our observations on the Commercial and economic scene in the City for June can be found below:

Those that like to play the slots and other games of chance may soon have a new destination to head for in the region, with a major development proposed for the Terrace area that would combine a hotel, convention centre and casino in the city's downtown area. The City of Terrace is looking at the project as a way to make their city the centre for any convention business that may want to come to the region. Should Terrace approve the expanded presence in the Terrace area, there could also be some impact found on the Prince Rupert Chances operations, as local residents make the ninety minute ride down the highway for a weekend getaway.

The month of June found the Canadian publication Moneysense release its annual rankings of communities across the nation, with Prince Rupert moving up one notch in the magazines data base for the 2016 Survey. Prince Rupert placed at 196 of the 219 communities surveyed for this years collection. The magazine's snapshot focused on the city's unemployment rate, housing market situation, crime statistics and local taxation levels among some of its baseline indicators.

Rainbow Chrysler celebrated the completion of its massive renovation project in the city, with a Grand Opening held in June to showcase the range of expanded services that are available at the Prince Rupert auto dealership in the Yellowhead Centre region of the city.  Owner and General Manager Brian Musgrave showed a strong sense of confidence in the future of the city, noting that the  expansion and renovations place the dealership in good shape for the growth that is anticipated to come for the community.

Another business that has high hopes for the local economy is MacKenzie furniture the renovations at their 1st Avenue West location continue to show much in the way of progress, with the front facade of the expanded showroom starting to take shape along the street front. The store remains open while the work is going on, once completed the new look for the long time Prince Rupert business will make for an impressive statement for the local retailer.

The City owned communication company CityWest is expanding its services again, with Metlakatla the next destination for CityWest's fibre-to-the-home technology to deliver internet services, with CityWest working in partnership with the all Nations Trust Company through its Pathways to Technology initiative.


June also saw the doors close to a long time fixture in the city's retail scene as Iain Cullen cleared out
the last of the stock at Farwest Sports. Mr. Cullen's retirement sale had continue through the spring with past customers dropping in for one more visit before the popular sports outlet turned out the lights for the final time.

The Prince Rupert Port Authority hosted its annual meeting in June, an opportunity for North Coast residents to get a glimpse into the impact that the region's industrial engine has on the local economy whether it is through employment opportunities or by making use of the service and supply chains found with local businesses. The meeting also explored the growing inter-connection between the port and local communities and what form of growth is on the horizon for the region. 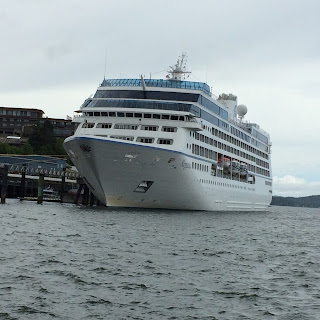 Prince Rupert's Cruise Strategy also was give a review last month, as the Port of Prince Rupert outlined for a Chamber of Commerce gathering what the state of the industry on the North Coast was like at this point of the 2016 season. Among some of the observations of the Cruise working group in the City was that some of the local shore based experience for independent tourists (those that don't take organized tours) was still one of few things to do for those that come ashore. The report also noted that the focus locally should be on the 500-600 passenger level vessels, where a dedicate approach to local service could be achieved. Towards that concept, the main thrust of the presentation that to carve out a piece of the competitive Alaska cruise scene, Prince Rupert may want to market itself towards smaller lines and the high end luxury vessels which carry fewer passengers.

The end of June delivered a flurry of financial information from the City of Prince Rupert, with the City's Statement of Financial Information offering some figures when it comes to the amount of money that the city spends with local business in the community.

You will be able to find the archive for Taking Stock as a part of our larger page dedicated to the commercial sector of the North Coast found here.

We imagine we probably have missed a few here or there, so if you know of a business having opened, or seen the Going out of business sign appear somewhere in the area, drop us a line at our email account of northcoastreviewpr@yahoo.ca

Or send us a short message through our twitter feed of @CharlesHays
Posted by . at 10:14 AM