Members of Lax Kw'alaams will soon have an opportunity to learn more from their Band Council on the latest developments involving the Pacific NorthWest LNG project.

Back in March, the newly elected Lax Kw'alaams Government reversed some of the opposition of the previous council towards the proposed development.

This month at the members only meeting, the Band Council will outline for the community more background on the proposed development and how it came to change the policies of the previous government over the last number of years.

It marks the first public opportunity for the members of the community to discuss the issues related to the project since the Band Council delivered its letter to the CEAA in March, offering support for LNG development but with conditions.

The cancelled meetings have now been rescheduled for July with four sessions set to take place towards the end of this month. 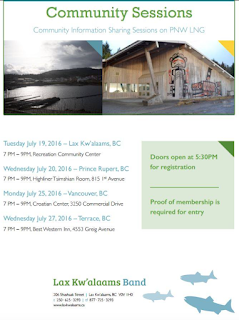 The first of the sessions is planned for Tuesday, July 19th at the Lax Kw'alaams Recreation Community Centre.

The meetings shift to Prince Rupert on Wednesday, July 20th with members to gather in the Tsimshian Room of the Highliner Inn on 1st Avenue West

Monday, July 25th, Lax Kw'alaams members living in the Lower Mainland will meet in the Croation Centre on Commercial Drive.

All meetings take place from 7 until 9 PM, with Doors opening for registration at 5:30 PM.

Proof of membership with the Lax Kw'alaams Band is required to gain entry to the information sessions.

The original series of meetings were postponed when it was determined that was a need for more preparation of information for review by community members, with the Band Council stating that they wished to make sure that a full and accurate presentation of facts was delivered to their members.

The proposed Lelu Island project has recently resumed its path along the CEAA process, with September now the anticipated period for a final decision on approval or non approval from the Federal Government.

In recent weeks, there have also been rumblings from the energy sector that Petronas, the parent company of Pacific NorthWest LNG may delay their own final decision by as much as a year as they weigh a number of economic conditions in the industry.

You can review more on the proposed project from our Pacific NorthWest LNG page here, while further items of interest from Lax Kw'alaams can be found here.