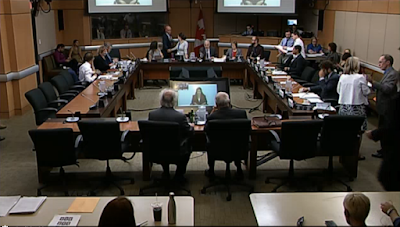 An opportunity for North Coast residents to weigh in on the ongoing discussions over electoral reform arrives tonight, as Skeena-Bulkley Valley MP Nathan Cullen hosts an information session, starting at 7PM at the Prince Rupert campus of Northwest Community College on 5th Street.

The project has consumed much of the summer for Mr. Cullen and a number of other MP's as they held parliamentary committee sessions and heard testimony from a range of participants.  With many of those participating to this point providing their thoughts on how best to improve the nation's system of parliamentary democracy.

The committee's work now moves forward towards nationwide information sessions, with the Skeena-Bulkley Valley MP in the region this week for a string of sessions on the topic.

Much of the material covered to this point might seem somewhat familiar to British Columbian's who have twice reviewed the prospect of electoral reform the first in 2005 delivered support of 58% for the Single Transferable Vote concept of the time.

The most recent attempt to bring about change coming in 2009 as we all discussion and then voted on whether to adopt the Single Transferable Vote system.

A short video from the time provides a reminder of the way the process had been explained to voters at the time.

The STV concept however was a prospect that ultimately was defeated by referendum, with 61 percent of those voting in the province saying thanks, but no thanks.

A refresher course on some of the notes of the time from that 2009 consultation can be found below:


The current Parliamentary committee's workload will continue through the fall, with the group tasked to deliver a report and recommendations by the end of this year.

The webpage dedicated towards this summers' project can be reviewed here. It provides an overview of the work so far and what is ahead for Mr. Cullen and the rest of the review committee.

Those who may wish to provide some thoughts on the topic but can't make it to a Committee session can submit their contribution by way of a form from the Electoral Reform Committee website (see here).

The deadline for submissions is Friday, October 7th

You can also participate in a pair of surveys currently underway related to the topic, the deadline to complete those surveys is also October 7th.


The schedule of events for the Northwest as outlined through Mr. Cullen's office looks as follows:

Some local notes on the upcoming Northwest sessions related to the Electoral Reform review can be found below:

More information related to the Northwest sessions can be found on the MP's constituency page.

We have been following the work of the committee over at Darcy McGee, our portal on political affairs. Some background on what they have accomplished to this point and what's ahead as they prepare to consult with Canadians can be reviewed here.

For more items related to the work of Nathan Cullen the MP for Skeena-Bulkley see our House of Commons Archive page.
Posted by . at 8:56 AM

Email ThisBlogThis!Share to TwitterShare to FacebookShare to Pinterest
Labels: Nathan Cullen to host electoral reform sessions across Northwest BC