The revelation that over 100 North Coast residents have received letters from Northern Health related to a sanitization issue with their endoscopy procedures has caught the attention of the MLA for the region, with North Coast MLA Jennifer Rice outlining her concerns on how Northern Health has handled the situation by way of a letter.

The letter directed to Health Minister Terry Lake directs the Minister's attention towards the issue and with the MLA making note of the lack of cooperation that Northern Health officials have provided to this point for patients that have been affected by the situation.

Over the course of the three page correspondence, Ms. Rice observes that the amount of information and process of delivering it from Northern Health has not resolved patient worries, but rather has added to them.

She notes for the Minister that while Northern Health suggests any patients with concerns should contact their family physician, with the scarcity of physicians in the north some may not have access to a family doctor, she also highlights a number of concerns with the information that Northern Health has provided to affected patients, with some of the options listed not particularly helpful when it comes to accessing more information and reassurance. 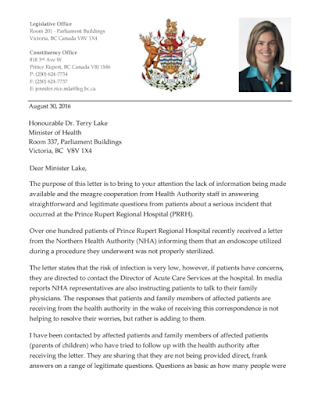 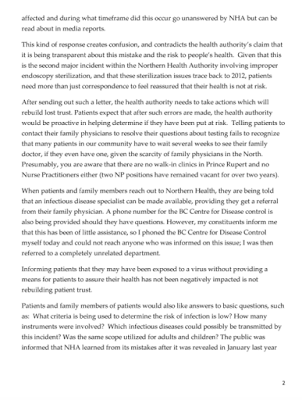 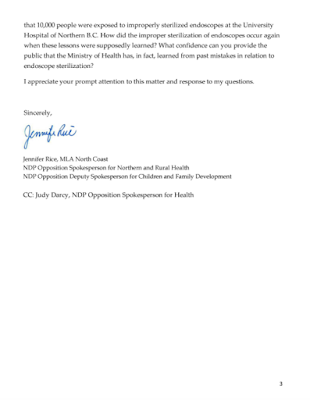 More notes on her correspondence to the Health Minister can be found from the MLA's constituency page.

The situation first came to light through an item in the weekly newspaper, with other media outlets across the North Coast picking up the story over the course of the last week.

Their contributions to the review of the situation can be found below.

For its part, other than the original letter directed to the over 100 patients affected by the sterilization issues and a few comments to local media, Northern Health has not had much in the way of information to share with the public.

The issue has not been noted on the Northern Health website to this point, nor has there been any reassurances offered, or guidance for residents of the region provided through that information portal.

While Northern Health officials have observed that in their mind there is no health concern related to the issue and that patients with concerns should contact their family doctor, the way they appear to be approaching the topic is leaving many in the community concerned about the level of disclosure and transparency that the regions health provider has taken in this matter.

More items related to Northern Health can be found on our archive page here.