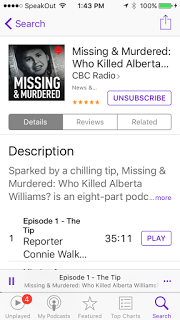 The long dormant case of the murder of Alberta Williams in Prince Rupert is once again a "very active" file and according to a CBC report, it was the recent CBC podcast programming related to the murder that has provided the spark for the renewed interest from the public.

In an update to the story posted to the CBC news site yesterday (see here), it was revealed that the investigation into the 1989 murder has found some momentum, with the renewed focus partly found thanks to some of the attention that the eight part podcast series has created.

The Podcast which is a production from the CBC out of Toronto has been tracing the background to the murder, with much of the information culled from the notes of one of the original lead investigators of the time.

It was an email to the CBC from Gary Kerr that launched the podcast production, the eight part series debuted on October 25th and concluded this week.

Hosted by Connie Walker and produced by Marnie Luke, it has taken the listener on a journey into Prince Rupert of 1989 and followed a trail of hints, observations and leads, as well as to suggest the identity of a suspect into the 27 year long murder investigation.

However, with a lack of evidence the case is still an open file and remains part of the ongoing Project E-Pana investigation into missing and murdered women along Highway 16.

You can review our notes from the introduction of the project here.

The Podcast series which is available for download or streaming through your computer can be found here.
Posted by . at 10:20 AM

Email ThisBlogThis!Share to TwitterShare to FacebookShare to Pinterest
Labels: CBC Podcast wraps up on the murder of Alberta Williams