For Prince Rupert's Justin McChesney every game though 2016's University fall season must have had the feel of a basketball clinic, offering up learning opportunities on every possession as the UBC Thunderbirds continued to dominate in their play for the first half of the schedule on the road to March.

The T-birds are offering up a well balanced game so far this season, with the former Rainmaker coming off the bench and inserted into the action in a number of game time situations, part of the process of adjustment to the quicker pace and strategic planning required of University ball.

Such were the efforts of the T-Birds in the first half of the season that heading into Christmas they have claimed the status of one of the top squads in the CanadaWest conference of Canada's University game known as U Sports.

In the final rankings of the month, the T-Birds find themselves holding down the number two position nationally, with only the defending National champion Carleton Ravens out of Ottawa holding the T-Birds back from the Top position in the country.

UBC achieved their push to number two with a combination of strong offence and tough minded defensive play. The stats sheet to December highlights some of results of the UBC system, an on the court blue print which has seen the T-Birds collect 716 Points through their offensive play, while holding the opposition to 559 points over the course of their first 8 games of Conference action.

Coming out strong after the first tip off of the season has been key to the UBC success to date, with an 8-0 record in the CanadaWest conference propelling them to the national rankings for December 6th. 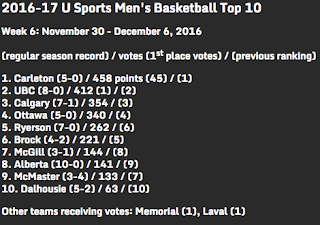 The early season success comes from countless hours in the gym in practice and from play in both Conference action and exhibition match ups over the course of the last three months.

For the Rainmaker that is settling into the Birds nest, this season is very much one to learn the UBC system and soak in as much as he can when it comes to the Thunder Bird approach on the court.

As for an individual stats review, when it comes to the playing time and point totals to the Christmas break for Mr. McChesney, the numbers look as follows:

The Thunderbirds are back in action at the end of the month as they head to Phoenix and an appearance at the Phoenix College Holliday Classic.

UBC has three games over the course of their 72 hours of play in the US Southwest.

The schedule looks as follows:

When they head back into their regular schedule on January 6th, the Thunderbirds will head for Saskatoon, where UBC will play the Saskatchewan Huskies in a two game series. 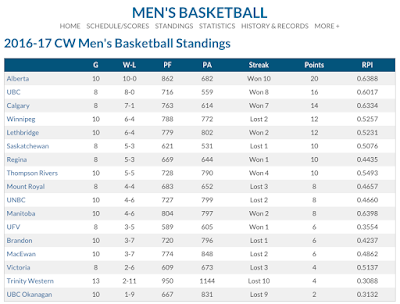 You can follow more items related to Prince Rupert athletes in sports away from the North Coast from our archive page.
Posted by . at 9:47 AM

Email ThisBlogThis!Share to TwitterShare to FacebookShare to Pinterest
Labels: Justin McChesney stats at the Christmas break