Monday night's City Council session for the most part was all about two issues, the upcoming round of fee increases for the city's utility services and how to allocate some of that money towards a start at putting money aside for the growing list of infrastructure concerns that face the city.

Much of the evening was turned over to the City's Financial Officer Corrine Bomben and City Manager Robert Long, who both took turns emphasizing for Council members the key points of the plan created by staff to create dedicated asset replacement funds.

In addition to the planned increases for the assorted fees, the CFO also outlined a few notes on other utility issues, noting that the recommendation of a conversion to water meters for commercial payers is encouraged and how fairness will be incorporated into the bylaws to eliminate the subsidization of certain services by the community rate payers as a whole.

With Councillors Mirau and Kinney not in attendance, it fell to the remaining Council members to offer up a string of comments and observations on the theme. Many expressed their concerns on the impact to the taxpayers, or bemoaned the lack of action from previous councils, while at the same time  acknowledging that the city's infrastructure issues was something that needed to be addressed.

Councillor Randhawa was the only member who specifically observed that he considered the requested five percent increase as too high, while other Council members appeared to be more resigned to the concept that it was an amount that they were prepared to accept.

The main takeaway from Ms. Bomben's presentation to Council was the explanation as to how the City would split up the proposed five percent fee increases per year, noting that staff was recommending that three percent would go towards regular operations; while two percent would be set aside for capital renewal of core infrastructure.

He offered up that the reality is that within a year or two the federal government would not be getting any grants, unless the City has an asset management program, those are the signals that the senior levels of government is giving at this time. With the City having received 80,000 dollars last year from other government levels to create a plan and that you just can't leave it on a shelf you have to put money into it

Further to that, he noted some of the risks the city faces including such issues as the prospect of a failing bridge or a water system problem, noting that for the most part much of our infrastructure is way beyond their useful lifespan.

He added that the city is running on borrowed infrastructure time and how if the City doesn't start to put some money away to cover those things off, the City runs the risk of having no money when something fails and run the risk of not ever being able to get another grant because we don't have a proper asset management program.

Mr. Long called those elements issues that are risky things for Council to ignore, stating that as professionals they have an obligation to advise council that this is the most rational and appropriate behaviour on behalf of the city as a corporation to put some money away.

To bring the discussion to an end Mayor Brain offered up the suggestion that Council move forward with the proposal for the fee increases and asset management fund, mapping out how they will address the reserve fun in the months to come.

Before moving the motion forward, Councillor Thorkelson asked for staff to prepare a five year plan for consideration, to allow Council members a better understanding of what those increases would look like over the next five years, she also requested that staff outline and estimate on what a new cell for the City dump site would cost.

Council then provided the motion with a first, second and third reading on Monday, with a Special session now on the calendar for tonight at 5:30  where they will settle in to provide the final reading for the motion and set the fee increases plan

A full overview of how the discussion ebbed and flowed on Monday night is available on our Council Timeline feature and you can sit in on the back and forth of the conversation through the City's Video Archive, the Fee increase portion of the night starts at the 16 minute mark.

The City's full documentation on the proposed fee increases and asset management fund plans can be reviewed from the Agenda to this evening's Special council session.

For easier reference, you can find the various schedules of note from that Agenda package below, providing the outline for those fee increases for water, sewer, waste disposal and cemetery services, which if approved tonight, will take effect in the New Year. (click on each item to expand): 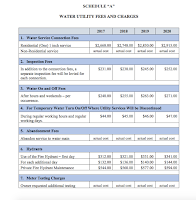 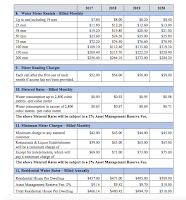 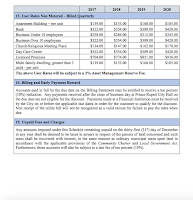 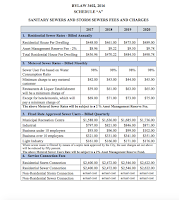 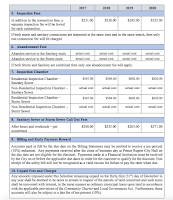 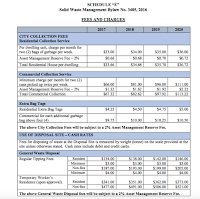 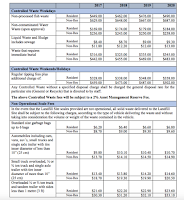 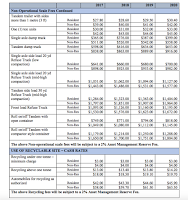 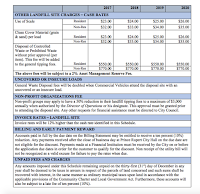 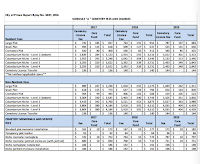 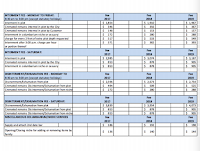