The latest edition of the CityWest telephone directory has arrived in North Coast mail boxes and as they have over the decades now, the City of Prince Rupert owned communication company is featuring a combination submission from the public, as the centrepiece for the cover for the local listings.

This year the cover photo features a sculpture by Laurence Knowles a Haida artist who was raised in Prince Rupert and has been traditionally trained in carving Wood and Argilite. His work is regularly featured at the Museum of Northern British Columbia

The photography for the CityWest cover page was provided by Rob Rydde, it's not his first time on the cover of the CityWest directory for the Prince Rupert photographer.

Mr. Rydde was last featured on the 2014 cover when his photo of a supermoon rising over Mount Hays captured the imagination of many.

CityWest launched its search for the 2017 Cover photo back in July. 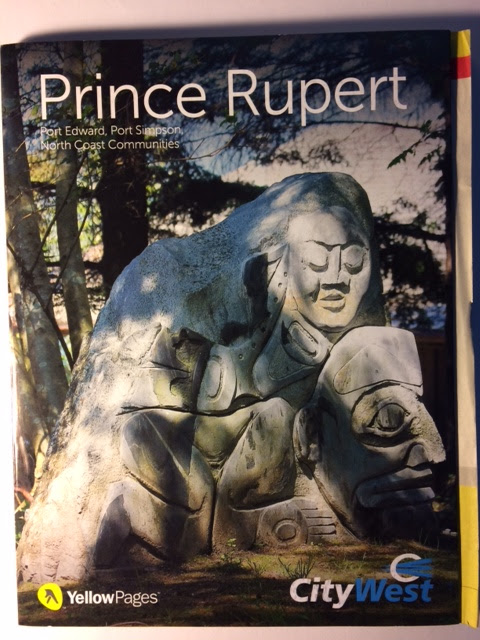 As for the contents of the 2017 directory, in addition to the listings of telephone numbers for North Coast communities (found in the back section) and Yellow page entries (which are found in the first section of the directory), the CityWest  phone book also includes an emergency information page at the very front as the first item you view, once you crack the cover.

The Directory also features  a community guide featuring a map of the city, the Garbage collection scheduled and a short synopsis of some of the community organizations and groups in the city.

Pages 23 and 24 offer up some emergency preparation information related to Earthquake and Tsunami dangers for the North Coast.

More notes related to CityWest can be found on our archive page.
Posted by . at 1:12 PM