The "We're Hiring" sign is up again for the City of Prince Rupert, as the Recreation Department goes on the hunt to fill two positions for the city's climbing wall at the Jim Ciccone Civic Centre.

The two positions were posted to the City of Prince Rupert Jobs listings this week and issue the call for applications for a Climbing Wall Attendant and a Climbing Wall Belayer.

The exempt positions, which report to the Recreation Coordinator will provide for the safety and enjoyment of those that make use of the Recreation Centre Climbing wall.

Candidates for the two positions that are available for January will be expected to be friendly and helpful, as well as to be able to interact with climbers, parents, other guests and team members.

An ability to deliver orientation for climbers and enforce climbing wall rules are among some of the main themes of the duties for the two positions.

The Recreation Department can be reached by email at hrrec@princerupert.ca

The closing date for both positions is January 30th, 2017

Some background on the Climbing Wall at the Civic Centre can be found here.

Previous employment opportunities and Labour notes from the City of Prince Rupert can be reviewed from our Archive page listings here. 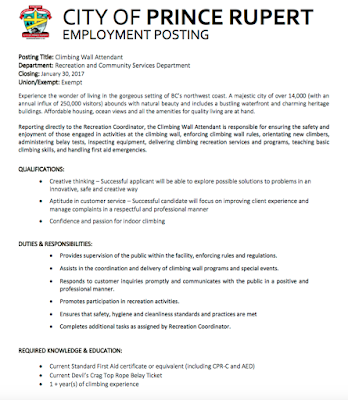 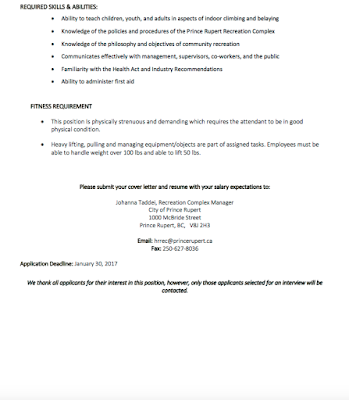 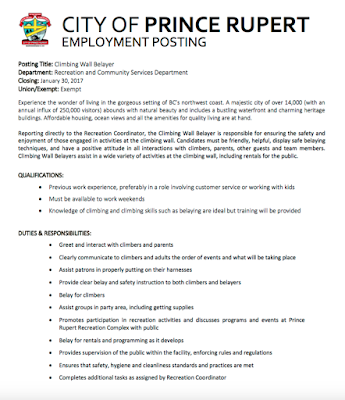 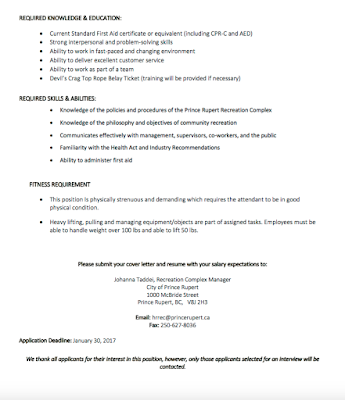 Email ThisBlogThis!Share to TwitterShare to FacebookShare to Pinterest
Labels: Recreation Department openings for 2017