Students and their parents on the North Coast looking to take advantage of the two Hockey Academy programs in Prince Rupert will want to take note of a pair of January meetings, two sessions which will provide more background on how the program works in the community.

The Pacific Rim Hockey Academy has two information session planned for late January, with meetings planned for both the Prince Rupert Middle School Program and the newest addition to the Hockey Academy concept hosted at Charles Hays Secondary. 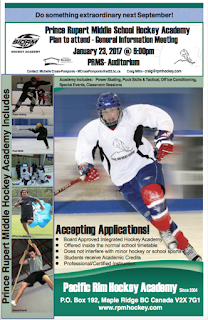 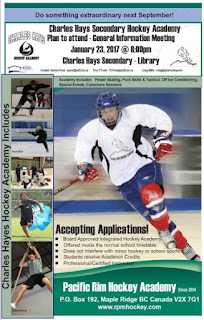 The PRMS session is scheduled for January 23rd at 6 PM at the PRMS Auditorium, while the Charles Hays the information session takes place January 23rd at 8 PM in the School library.

At both sessions a glimpse into what the two programs have to offer students will be provided as well as a look at some of the past work by Pacific Rim in the community. Applications for the September 2017 program period will also be accepted at that time.

The Academy which is hosted by the Maple Ridge organization is part of a growing list of similar academies in the province and puts a focus on power skating, puck skills, and Tactics, Off Ice conditioning and Class room sessions as well as occasional special events.

The Board approved academy program is offered inside of the school timetable and does not interfere with minor hockey or school sports. As part of their participation in the program students receive academic credit.

You can find out more about each program from the Pacific Rim website as well as from the Prince Rupert Minor Hockey website.

More notes related to Education on the North Coast can be found on our archive page here, while further notes on Minor Hockey in the Northwest can be reviewed here.
Posted by . at 12:31 PM