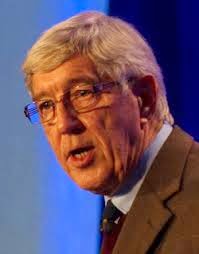 A former long time political fixture on the North Coast has taken to the editorial pages of the Vancouver Sun once again, with another cautionary tale on the need to understand the importance of resource development for the province.

Dan  Miller, the NDP MLA who represented the North Coast from 1986 to 2001and became Premier on an interim basis for a short period of time following the departure of Glen Clark in 1999 has been an occasional contributor to the editorial pages of the Vancouver paper over the last few years.

The focus for a number of his previous submissions mainly related to the resource sector and how resources should not be considered a dirty word by the NDP membership.

The theme for this weekend's  contribution was the Kinder Morgan Pipeline and the former Premier's observation that the reality is that British Columbia is a maritime province and one which can't deny the landlocked provinces the opportunity to develop their resources and build their economies.

As part of his overview of the current controversy in the province, Mr. Miller offers up his thoughts at how the balkanization and squabbling between provinces could degrade and diminish our economy to the detriment of all Canadians.

He also notes that the major ports of Vancouver and Prince Rupert have grown significantly over the years as a gateway to the world sending our country's products to distant shores, generating jobs and tax revenue in B.C. and across the country.

As part of his essay, Mr. Miller delivers his personal support for the Federal government's plan to twin the Trans Mountain pipeline, and provides a range of points for consideration. With observations ranging from the development of social programs such as Medicare to the distribution of wealth that resource extraction has delivered to the province and the nation.

Mr. Miller notes that while he is out of step with some of the current thinking within the NDP at this time, but adds that he will still be voting for NDP leader John Horgan in May.

He also calls on his time in Prince Rupert as a trades and union worker at the Skeena Cellulose pulp mill, noting how jobs in that mill put food on the table for hundreds of families.

On a political theme he provides his own personal remembrance of former Alberta NDP leader Grant Notley, the father of the current Alberta Premier Rachel Notley, and how in 1973 Mr. Notley came to Prince Rupert to help elect the first NDP MLA in the riding's history.

It would appear to be one of those key moments from his political history which resonated with the then pulp mill worker, who would go on to enter public life, first as a City of Prince Rupert council member and then to seek his own seat for the North Coast three thirteen years following that appearance by the Alberta NDP leader.

His final thoughts from the editorial piece offers up some words that should make for some reflection for many NDP members on the North Coast when he observes that you can develop a hydrocarbon resource for the benefit of working people without degrading the environment.

A theme that at times seems to get lost from the current evolution of the NDP's message from the days when Mr, Miller was the MLA, and seems to indicate the current dilemma that the NDP faces in the need to balance the environmental side and that of the labour component of the party make up.

Since leaving political office Mr. Miller has been involved in a number of advocacy positions related to the resource sector in the province among those organizations he has been involve with has been Resource Works.

The full Vancouver Sun submission can be reviewed here.

A look back at the growing volume of contributions can be found below:

More notes on provincial politics can be found on our archive page
Posted by . at 11:51 AM

Email ThisBlogThis!Share to TwitterShare to FacebookShare to Pinterest
Labels: Dan Miller returns to the editorial pages on resource development