ANBT Hall of Fame Committee names four for induction in 2017

Along with the high tempo basketball of All Native Tournament Week one of the most anticipated events of the week long festivities in Prince Rupert is the Hall of Fame Induction Ceremony, where Tournament organizers salute the work and achievements of those who have stood out from previous tournaments.

Some legendary names in All Native Tourney history have taken their place over the years and for 2017 the new class features a quartet who have blazed their trail on the hardwood and helped to shape the tournament into the major event it has become.

This week the ANBT Board has announced that the four athletes or builders destined for inclusion in the listings as Hall of Famers are:

Metlakatla saluted the selection of Ms. Wilson this week with a short biography of her time on the court and the inspiration that she provides to the community, including her work with the Prince Rupert Middle School's Girls basketball program. 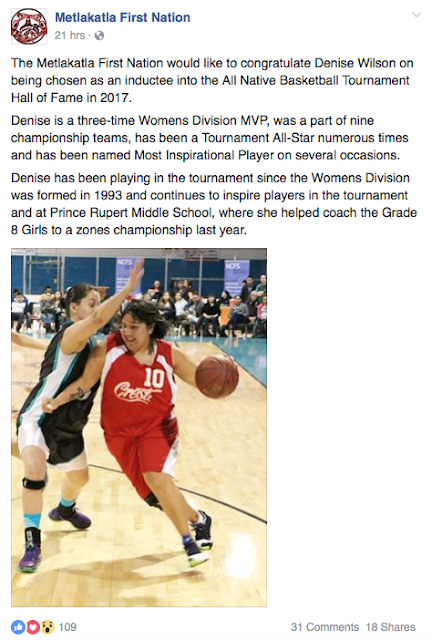 ANBT organizers recently released the list of the teams confirmed for this years Tournament.

The All Native Tournament starts on February 12th and wraps up with the Division Finals on Saturday February 18th.

You can keep up to date on any developments from the ANBT from their Facebook page or Tournament website.

More notes on ANBT items can be found on our archive page here.
Posted by . at 9:30 AM

Email ThisBlogThis!Share to TwitterShare to FacebookShare to Pinterest
Labels: ANBT Inductees for 2017