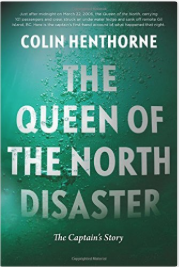 A new book on the sinking of the Queen of the North became somewhat of a North Coast best seller this holiday season, with the local book store Eddie's News having to bring in numerous shipments to keep up with demand for the account of March 21st and 22nd of 2006.

The book, The Queen of the North Disaster is authored by Colin Henthorne who was captain of the vessel on what would be its final journey.

Through the 224 pages, Henthorne explores the events of the transit from Prince Rupert towards Port Hardy, a journey which was interrupted during the course of that early morning off of Gil Island when the vessel struck an underwater reef and sank. A tragedy which claimed the lives of Shirley Rosette and Gerald Foisy who were among the 101 listed as aboard the vessel when it departed from the Fairview Ferry Terminal.

As we have since discovered through the many news articles dedicated to the story and the subsequent court testimony of trial, it was in the early hours of March 22nd that the vessel struck those underwater rocks near Gil Island and began to sink, launching an extensive rescue mission which featured the response of many of the residents of Hartley Bay, as well as through the work from the Canadian Coast Guard.

When that operation had come to its end the rescuers had safely retrieved 99 of the 101 on board the vessel, with neither Mr. Foisy and Ms. Rosette ever found and still listed as presumed drowned and now officially declared dead.

From his view of events Captain Henthorne recounts much of journey with a significant amount of his attention directed towards the early morning period, while at the same time offering his own thoughts on what may have happened during that trip, discounting many of the rumours that came out of the sinking, while making note of equipment changes that had been put in place on the vessel.

As well, Henthorne challenges much of the way that BC Ferries handled the sinking and is particularly strong in opinion when it comes to how the Ferry Corporation treated both himself and the employees who had been on watch that night.

In the period that followed the sinking, BC Ferries helmswoman Karen Briker was fired, while Fourth Mate Karl Lilgert was charged with criminal negligence causing death and sentenced to four years in prison.

Captain Henthorne, who was not on watch at the time of the incident, engaged in a lengthy fight to keep his job with BC Ferries but subsequently was dismissed, in a preview to his book he notes that it took him six years to recover his career.

His account of March 22nd highlights how many of the questions related to the disaster still remain unanswered and from his point of view, notes that BC Ferries had for the most part abandoned their on-board employees and how management has not examined its role in the events both prior to and following the sinking of the ship.

The former BC Ferries captain remains involved in the maritime world, currently employed at the Coast Guard Rescue Co-ordination Centre in Victoria BC.

You can stop in at Eddie's to put your name on the list for the next shipment, or make use of any number of online shopping options to secure a copy of a book that seems to have captured the imagination of the North Coast.

A look at how Captain Henthorne put together his book as well as some reviews of the work can be found below:

Email ThisBlogThis!Share to TwitterShare to FacebookShare to Pinterest
Labels: Queen of the North book by Colin Henthorne