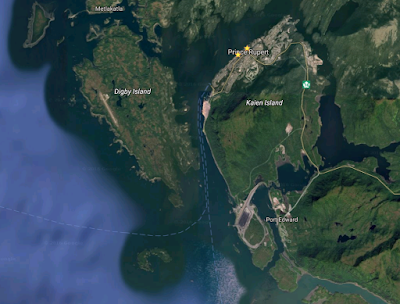 The end of the year it seems is all about lists, so we'll join in with that theme by looking back at the top items as selected by our viewers fingers over the course of 2016.

Below find those individual items (archive listings were excluded from review) which received the most views each month.

Taken from our weekly feature Blog Watching, the stories that follow were the one's which most caught the attention of our readers over the last 365 days.

Salmon Nation Summit ends with signing of Lelu Island Declaration -- January's most read item focused on the two day summit hosted by those that are opposing the Pacific NorthWest LNG development proposed for Lelu Island, the participants at the summit included MP Nathan Cullen and MLA Jennifer Rice who signed on to the Lelu Island Declaration  (posted January 25, 2016)

Two Rainmaker Squads hit the road this weekend to seek out a zones title --  As the action on the Northwest basketball courts heated up, our notes on the travels of the Charles Hays Rainmaker teams continued to attract a large readership. (posted February 18, 2016)

Financial Post article on Lelu Island LNG terminal ultimatum creates a Monday tempest  -- The LNG story continued to be one of the most intriguing items of study for the year, with our look at a March article in the National Post's Financial Post section making for much interest for blog readers(posted March 7, 2016)

Second Cruise ship of the season set to pull in for eight hour stop over -- Judging by the volume of readers that explored our look at the 2016 Cruise Ship season,  the community continues to find much interest in local efforts to rebuild the cruise industry portion of the tourism sector in the region.  (posted May 29, 2016)

Salary and Expenses on the rise from Prince Rupert's 2015 SOFI review -- The middle months of 2016 found readers reviewing many of our notes when it comes to City Council's work on their budget planning, the review of the annual Statement of Financial Information provided for the largest number of views for the month. (posted June 29, 2016)

Regional District paydays put Mayor Lee Brain into the $100,000 club for 2015 -- With the annual salary numbers for Mayors and Civic staff members delivered in July, our comparison of Prince Rupert numbers with those of other BC communities generated strong interest. (posted July 4, 2016)

PRMHA re-launches the Big Assist hockey registration program -- Our notes on the launch of the 2016-17 minor hockey season and how the PRMHA is helping to reduce the cost of playing the game found a large audience.  (posted August 9, 2016)

North Coast MLA Rice adds to chorus of comments on Pacific NorthWest LNG approval -- With the CEAA providing it's conditional approval for the Pacific NorthWest LNG project, North Coast MLA Jennifer Rice weighed in on the local discussion, offering up her thoughts on what she would be watching for as the process moved forward (posted October 1, 2016)

If City Council wants to discuss islands ... it may be a timely moment for an update for one named Watson  -- With City Council focusing much of its attention towards LNG development in Port Edward, our reminder of the still unresolved issues of Watson Island found a large audience. (posted November 18, 2016)

City Council's 'LNG conditions Wars' ... The Business Empire Strikes Back -- City Council's ongoing discussions when it comes to the Pacific NorthWest LNG project for Lelu Island brought a large contingent of local business operators to Council chambers, providing their views on how the City was handling the issue. Our review of a public comment session at a late November council session proved to be the most read item of our December news flow (posted December 1, 2016)

You can dig deeper into each week of our Blog Watching feature over the last 52 weeks from our archive page found here.

For a wider overview on political themes we offer up three archives of note:

If our sampler of greatest hits from 2016 has caught your attention, a wider overview of a range of categories is easily found on our right hand column area.  You can catch up with much of what happened in the year just ended from the number of archive pages that await further exploration.

As well for those with an interest in both provincial and federal politics, we offer up a companion blog for your review, over at D'arcy McGee we post some of the highlights of our North Coast Review items as well as expand on some of the themes of politics at both levels.

If you have some free time over New Year's Day, we invited you to give it a look over.

To our faithful and growing readership we wish a very Happy and Safe New Year's Eve and all our Best for a most prosperous and enjoyable 2017!