While residents of the Northwest await further revelations on the fate of the various LNG export shipment terminals that have been proposed for across the region, another area of Natural gas delivery and one that is perhaps a little more familiar to residents of the region is making news and not in a way that many will be happy to see.

In an announcement on Wednesday, the British Columbia Utilities Commission gave approval for Pacific Northern Gas to increase in the cost of delivery of Natural Gas to the Northwest. The approval means that residential users will have to re-adjust some of their financial budget planning for the New year, making for yet another in increased rates and fees that we will all face for 2017.

As part of the Wednesday statement, the BCUC explained the details to the range of pricing increases across North British Columbia, with the most expensive shift coming for residents on the Pacific Northern Gas system living from Vanderhoof to Prince Rupert/Kitimat. 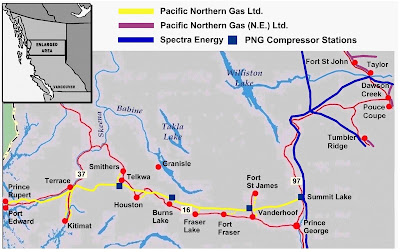 In the Northwest the new residential rate as of January 1st will be at $16.85 per GJ (Gigajoule) making for a two dollar, thirty cent increase from previous levels of $14.55 in 2016.

In its decision of December 20th, the BCUC outlined a number of factors that it had considered in determining the rate of increase for the Northwest.

The increase in delivery rates is required in Fort St. John, Dawson Creek, Tumbler Ridge, and Vanderhoof to Prince Rupert/Kitimat primarily because customer demand has declined, particularly in the industrial customer rate class. As well, small increases in operating expenses are required to run and maintain the PNG systems. When customer demand is forecast to decrease, any increase in delivery and commodity costs are spread over fewer GJs resulting in a per GJ rate increase.

You can review the full statement from the British Columbia Utilities Commission here.

The Approval order and its conditions can be examined here.
Posted by . at 9:10 AM

Email ThisBlogThis!Share to TwitterShare to FacebookShare to Pinterest
Labels: Natural Gas price hikes for residential and business users in 2017