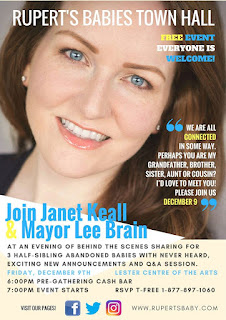 The stage is set for what has been described as a night of behind the scenes sharing, that will provide for some surprises and a few new revelations as the Lester Centre plays host to a free community forum to explore the theme of the Rupert Babies.

It's a story that has captured the attention of more than a few residents of the city, as it expanded from the initial search by Janet Keall for her birth mother, to a quest that has now included two other infants abandoned at birth by the same birth mother.

The trio have all recently connected through the efforts of Janet as she continued with her quest and called on Prince Rupert to lend a hand in her work.

The three, Janet, Kathie and Kevin, were abandoned safely as healthy babies in the city from 1976 to 1979 and have been proven by DNA testing to be half siblings.

That connection has led them to now seek further information on their biological parents and that ongoing search brings Ms. Keall back to Prince Rupert for tonight's forum.

Mayor Lee Brain has taken on some significant interest in both the Rupert Babies story, as well as in some of the work of organizing tonight's forum at the city's arts centre.

He first outlined his initial contact with Ms. Keall back in September and since that time has been making use of his Facebook page to provide frequent updates related to her work on the search for more information, as well as to offer up more information when it comes to the planning for the forum.

A recent interview with the Vancouver Sun provided a bit more background on what the pair hope to achieve with the Lester Centre gathering, a venue which Mayor Brain and Ms. Keall have rented out at their own cost, splitting the expenses required to host the Prince Rupert event.

The most recent update on the forum which was posted to the Mayor's Facebook portal on Thursday is offering up the prospect of a Big Reveal from Ms. Keall.

Along with that late development, the original goal for the night is still a focus for the pair, that of providing for an opportunity for those in attendance to ask questions or offer up any information that may have come to mind since the story first began to percolate on the North Coast.

CityWest has also indicated that it will be streaming the event live through it's website.

Tonight's event will not just make for local news, as the National magazine Chatelaine is continuing on with its coverage of the Rupert Babies' search, with a writer from that magazine also in town to follow the developments from this evenings forum.

The doors for the Town Hall open at 6:30, with the Mayor and Ms. Keall taking to the stage at 7PM. There's no admission required for tonight's event, with a cash bar available at 6 PM.

The Mayor and Ms. Keall are asking that if you plan to attend that you take a moment to RSVP on the Rupert's Babies website page. They also have more information available on the event from the Facebook page that they have created for their event.

The Rupert Babies story has developed a full social media presence for those looking to learn more about the search and follow past events, those links can be explored below:

We've have been compiling an archive of media notes on the progress of the search for more information and the planning for tonight's forum, those items can be reviewed here.

The permanent anchor spot for the archive is part of our North Coast Review Extra Edition section on our right hand side of the blog.