With less than a month to go before North Coast Liberals decide on their candidate for the 2017 British Columbia Provincial election, one candidate is taking a multi media approach to seek the support of the party membership.

Rodney Proskiw made his case for their confidence through a post to the North Coast Liberal Facebook page this week, as well as with a full page ad in the Northern View, with his introduction to the Liberal faithful highlighting some of his background in the community. 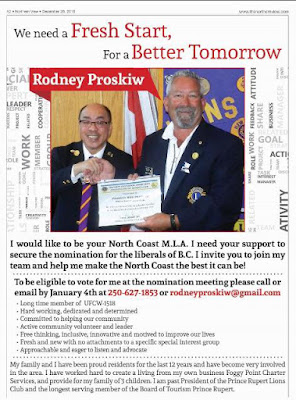 In his call for the support of North Coast Liberals, Mr. Proskiw also outlines a brief history of his family's twelve years in the region, noting his efforts to start a Charter Boat business here, as well as through his work with the Prince Rupert Lions Club and on the Board of Tourism Prince Rupert,.

He also offers up some thoughts on how he approaches the issues of the North Coast.

A long time member of UFCW-1518, who is hard working, dedicated and committed to helping our community.

An active community volunteer and leader who is approachable and eager to listen and to advocate for.

He also notes that he is free thinking, inclusive and innovative, motivated to improve our lives with fresh and new ideas, with no attachments to a specific special interest group.

As part of his presentation to local Liberals he also outlines that for supporters to be able to vote for him at the nomination in late January they must register, asking them to call or email him prior to the deadline of January 4th.

Those interested in becoming members of the BC Liberal Party can find out more about that process here.

So far the only other candidate to indicate interest in the nomination is Herb Pond who launched his exploratory moves back in November.

As we noted on the blog earlier this month, the North Coast Liberals will hold their nomination meeting on January 21st.

Updates on their plans can be found on the North Coast Liberal Facebook page.

More notes on the upcoming race for the North Coast seat in the British Columbia Legislature can be found on our archive page here.