As the days of December begin to march towards a new year, a number of North Coast community groups are still waiting to hear from the Province as to the status of their current outstanding applications for Community Gaming Grants.

A number of ongoing issues and the delays related to that decision making and grant awarding process, have caught the attention of the Province of British Columbia's Auditor General  Carol Bellringer .

As part of her report to the province issued this week, Ms. Bellringer made a number of recommendations as to how the Government can improve performance when it comes to the process in place.

By any measure 2016 has been a challenging year for the Government in delivering on its grants process. With the process of approval one which has been very slow to this point, with grants that are usually settled in the late summer or early fall still sitting in the review stage heading towards the end of the year.

Caught up in the backlog of those applications are a number of Prince Rupert groups, with a number of local organizations still awaiting word on what funds, if any, that they will have access to. Something that is quite important for many, as they look to make their own financial plans for the year ahead.

According to the latest data released from the Province, there are twelve Community groups in the Prince Rupert area seeking funding from the program, with only one currently listed as completed, that being for the Royal Purple of Canada Branch Number 8.

Seven other North Coast groups are listed as still in Progress, while four remaining applications have been placed on hold, with the provincial government awaiting more information to be provided. 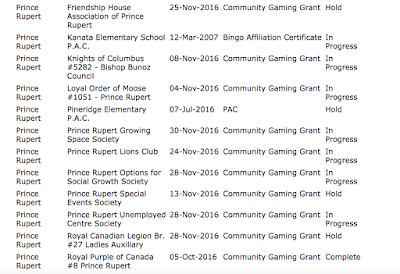 The province has not provided a timeline as to when they hope to clear up the back log when it comes to the grant process. Though they clearly have a fair bit of work ahead, as the length of the full list of those groups across BC that are still waiting for confirmation is a lengthy one, you can review the latest update here.

More background on the Community Gaming Grants and a review of the extensive process required to submit applications is outlined here.

The growing controversy over the delays to the decision making gets an examination in some of the articles noted below: