An Epicurean adventure for January with Dine Out Prince Rupert 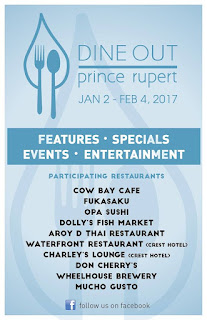 A chance to explore a few of Prince Rupert's growing options on the dining scene will arrive in January as a new project celebrating the diverse nature of the North Coast restaurant industry takes shape.

Dine Out Prince Rupert was recently launched, patterned after a similar concept out of Vancouver the North Coat version features a number of local restaurants as participants, with special events, dining features and entertainment all part of the month long program to highlight the food sector in the community.

A Facebook page has been created to spread word of the project which will take place from January 2nd to February 4th.

The project is described as one that is a collective marketing effort of Prince Rupert's restaurants to encourage diners to try different local venues. Something that should see an increase in food photos to make their way to social media from January to February as Prince Rupert food fans begin their exploration.

Those participating in the Dine Out Prince Rupert project will develop a special discounted feature drink menu for the promotion and could also test out some new menu items as the month moves forward.

Participating restaurants to this point for the Prince Rupert event include:

With the 2017 the debut year for what we imagine organizers hope will be a long run on the North Coast, here's a look at the blue print from Vancouver (Facebook and Website).

As well the Vancouver version features a YouTube presentation that showcases what that event is all about, something that the local organizers might want to consider as they look to create some buzz for the Prince Rupert version.

You can find more notes on Prince Rupert's Commercial sector from our archive page here.

Email ThisBlogThis!Share to TwitterShare to FacebookShare to Pinterest
Labels: Dine Out Prince Rupert coming in January