As the Kootenay International Hockey League head into the final days of their Holiday break, the reality of a two week day break from action was about the only thing that could slow down the scoring streak of Prince Rupert's Judd Repole.

With the Rupertite continuing to hold the lead spot in the Osyoos Coyotes scoring parade as the team went on it's holiday hiatus.

The last game for the Coyotes prior to the break was played on December 14th, and as they put the blades aside for a bit the former PRMHA graduate found himself with 43 total points for his first three months of play in the K.

Repole combined goal scoring with a keen ability as a set up man with his totals coming to 10 goals and 33 assists in just 28 games, propelling him to an on ice performance ratio of 1.5 points per game.

His play making skill is also paying off for the Coyotes in the Standings, as the Osoyoos players settled in for their Christmas break they were hosting  a 22, 5 and 1 record to this point of the season.

Those stats are good for a division leading 45 points and make for a three point lead over Summerland in the Okanagan/Shuswap Division. While also moving them into the fourth place spot in the overall standings of the 20 team league, with the Coyotes holding a range of games in hand when it comes to the teams above them.

When they weren't tearing up the standings, Repole and his team mates were taking part in a number of community events in the Osoyoos area, with the Toys for Tots to Teens Breakfast and the community Festival of Trees celebration finding the Assistant captain representing his team. 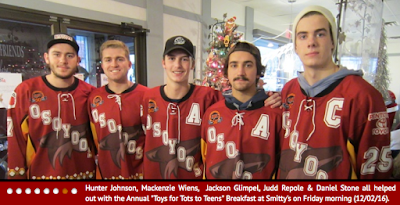 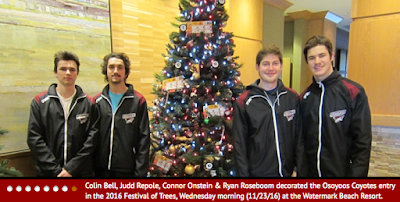 The Coyotes head back to the ice on December 28th, when they resume their push towards playoff placement with a home date with the Kelowna Chiefs. The Osoyoos squad has nineteen regular season games left to take them to the season's end of February 18th, which presents more opportunity for Repole to add to his break out numbers of 2016.

You can review some of the notes related to the Coyotes season to this point from our archive page here, it also offers up some links to other Northwest players in other hockey programs across the country.