After a couple of tough losses on the road and some space starting to appear between the Prince Rupert Rampage and the top of the CIHL standings, the home side squad will be looking to get back on the winning side of the ledger Saturday night at the Jim Ciccone Civic Centre.

The Rhinos enter the weekend holding down fourth place in the CIHL with eleven points, yet the distance between fourth and second is but three points.

Saturday night's competition, the Smithers Steelheads are just one point ahead, but hold one game in hand on Prince Rupert, with Smithers having only played 9 contests so far in the 2016-17 season.

There are two keys to success for Saturday night for the Rampage, the first to shut down the Steelheads in the Rupert end of the rink, the Rhinos defensive play has suffered some untimely lapses in recent weeks, leaving them third overall in goals against with 51.

Taking advantage of the power play situations that present themselves should also make for some focus for the Prince Rupert squad, which has left too many potential goals off the score sheet in recent games, as they head into Saturday night they will be looking to put a spark into their play when the competition offers them the chance.

With only six games remaining in the regular season, it's close to crunch time for the Rampage if they want to put a push on to claim some home ice advantage in the playoffs.

Saturday night's game also marks the last home game prior to the CIHL's Holiday break, with the Rhinos not back in the friendly barn on McBride until January 7th.

As it is the final home game for 2016 and the last action for the team until the New Year, the Rampage will be hosting a string of off ice activities tied into Saturday night's match up, including free admission for the youngsters twelve and under with a non-perishable donation for the food bank and prizes for the best signs and loudest cheers.

As well, a number of some of the youngster's favourite characters will be on hand for the game and taking part in the post game autograph session with the Rampage players.

Sunday, the team is hosting its annual Skate with Rampage, with admission to the Civic Centre and skate rental free for those make a donation to the Prince Rupert Salvation Army Food Bank, that event takes place from 4 to 5:15 PM.

You can learn more about both of those events here.

While Rampage fans can keep track of team notes and any events from the Rampage Facebook page. 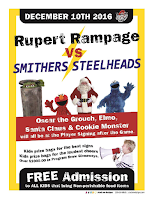 Saturday night the team also makes its High Definition debut with CityWest's Community channel Ten which will be broadcasting the game for those that can't make it down to the Jim, the match up will also be featured in the week that follows as CityWest rolls out its new HD viewing service on Channel 310.

You can look back at the season so far from our Rampage results page, while a list of articles and other notes on the 2016-17 CIHL season can be found here.